New materials and digital technology are making modular construction a more efficient construction option than before, but there are still obstacles to its growth and acceptance. One of those is the term “modular” itself. The construction method needs a rebrand, experts say, to ditch some old and incorrect connotations.

“With the term modular, there are preconceptions of a double-wide going down a highway: less than attractive, subpar housing,” CON Architecture Practice + Design Team Leader Kendra Halliwell said on Bisnow’s Modular Housing for the Future webinar last week. “We’d like to get away from that with a rebranding. Perhaps saying ‘off-site’ or ‘volumetric construction.’ Anything that can be built in a factory counts as off-site.”

Moreover, “modular” barely does justice to how sophisticated the process can be, she said. In off-site construction, new digital tech is being applied to different facets, such as the design of the off-site components — the modules, the logistics of their delivery to the site, and the coordination of putting them together on site.

The acceptance of modular construction in the United States is still sluggish, even as it has been accepted in other parts of the world, such as Japan and Scandinavia. But with construction labor in short supply and the need for housing at all-time highs in Boston, the time and cost efficiencies offered by digitally enhanced modular construction, or whatever it could be called in the future, would help overcome those problems.

Modular construction can reduce construction costs as much as 20% and project time as much as 50%, compared to standard construction methods, according to a 2019 McKinsey & Co. report, “Modular Construction: From Projects to Products,” which also serves as a guide to the role that modular can play in the future of construction.

The technique has caught on in other parts of the world, but a misperception of low quality still lingers around modular — falsely, the report says.

“The construction industry as we know it now hasn’t changed in hundreds of years,” Halliwell said. “It’s incredibly inefficient. Off-site construction is a way to build more efficiently. We could take care of this housing shortage if we could disrupt this industry, and change the way we work and the way we build.” 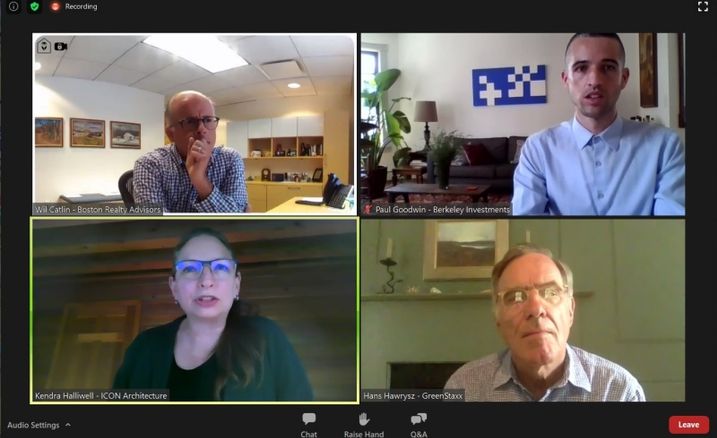 The other speakers joining Halliwell on the Boston-centric webinar cautioned that off-site construction isn’t a panacea for the ills plaguing construction in Boston or many other American cities, but rather a useful tool to improve the industry.

“Off-site construction is not necessarily a silver bullet for costs, schedules or supply considerations,” Berkeley Investments Development Project Manager Paul Goodwin said. “Still, it’s something that has a lot of promise to address a lot of different issues.”

Building components in a factory instead of on an open-air construction site helps control costs and schedules and can make a more sustainable and consistent product, he said.

“Can it do all of those things for all projects?” Goodwin said. “No. It needs to be assessed on its merits on a project-by-project basis.”

With off-site construction, the opportunity exists to apply the principles of mass production to the Boston housing industry, GreenStaxx Director Hans Hawrysz said. The key principles for going forward with the technique are standardized design, integrated production, replication and continuous improvement.

“Buildings are no longer constructed on-site,” he said. “More and more, they are assembled. The more you do it, the better you get, and the more productive you get. It reduces cost and increases profitability.”

The quality of off-site manufacturing of construction components is also better than that of traditional construction, Hawrysz said. Quality control and inspections are much easier, and the process is also more sustainable.

The off-site process is suitable for more than just low-rise properties, Goodwin said. High-rise structures built using the process exist, made of both steel and wood. The tallest modular building in the country was built in Brooklyn by Forest City, before it was acquired by Brookfield. The tallest in the world, two 40-story apartment buildings in Singapore, opened last year.

“We’re looking at a project now that’s a steel-and-concrete high-rise,” Halliwell said. “Each project is a little different.“

The process also needs an integrated team to make it effective, Hawrysz said. Since it involves a manufacturing process, the construction team needs a lot more coordination upfront.

“That also eliminates some of the rework down the road,” he said. “Much of rework is caused by imprecise documentation, so everybody needs to get together upfront.”

As many possible advantages as off-site represent, there are also challenges beyond the connotations of calling it modular, the speakers said. From the perspective of an owner, for example, there is some risk of having to rework an off-site component, Goodwin said.

“If you aren’t confident that things are designed and constructed the way that they are intended to be, then on-site rework is a real risk — and more laborious and later in the process,” he said.

Another challenge for the off-site process is while it can be much more efficient in the time it takes to build, getting access to the manufactured materials in a timely way isn’t always a given, Hawrysz said. That is especially a consideration in New England, where building material supply is constrained compared to other parts of the country.

ANPG warns of pandemic impact on licence round