5 Reasons Not to Worry About a Stock Market Crash

The stock market will crash again. When exactly it will happen is beyond my powers of prognostication, but the fact that it will happen at some point is about as close to a certainty as you can get in investing. If you’re worried about it happening and the effect it will have on your family, you’re not alone. You should take that worry as a sign that you’re not adequately prepared to handle the impact a crash will have on your finances and plans.

With the right plan, financial structure, and perspective in place, a mere market crash is nothing to worry about. As long as capitalism itself remains intact, market crashes often bring with them seeds of their own rebirth — such as how the bursting dot.com bubble laid the foundations for today’s Internet titans. The key for investors is to recognize that’s how the market operates and be prepared in advance. With that in mind, here are five reasons not to worry about a stock market crash.

1. You don’t need your invested money right away

Precisely because the market can crash, money you need to spend in the next few years should not be invested in stocks. The last thing you want to have happen is to be forced to sell more shares than you intended in order to cover a bill you have due. If that happens to you, you’ll find you have less money participating in any recovery that follows, thus reducing the wealth you wind up with.

In strong markets, leveraging margin can magnify your returns and make you feel like an investing genius. When things turn sour, however, that magnification effect works against you. Not only that, but your broker also has the right to change the terms of your margin agreement at any time for any reason. Often, that translates to making it more restrictive during a falling market, which would make any margin challenges you find yourself with even bigger problems than they already would have been.

If you’re not using margin, then no matter what the market does, you can’t be forced out of your position just due to falling share prices. That makes it far easier for you to both make it through the crash and stay invested as the market turns back upward.

3. You’ve got a little socked away, just in case

One of the challenges you may face when the market crashes is that often, there’s a good economic reason driving the market downwards. After all, stocks are priced based on expectations of the underlying companies’ prospects, and if those prospects sour, their share prices should quickly reflect that. On top of that, if a company expects less growth or to actively shrink, it may end up reducing the number of jobs it has, leading to layoffs.

With an emergency fund with around three to six months of expenses in it, you can be prepared for a temporary disruption to your income stream. That can help you reduce the temptation to pull money out of the market if your job starts to feel insecure as well as give you a little bit of breathing room in the event you do lose your job.

4. Your dividends are still getting paid 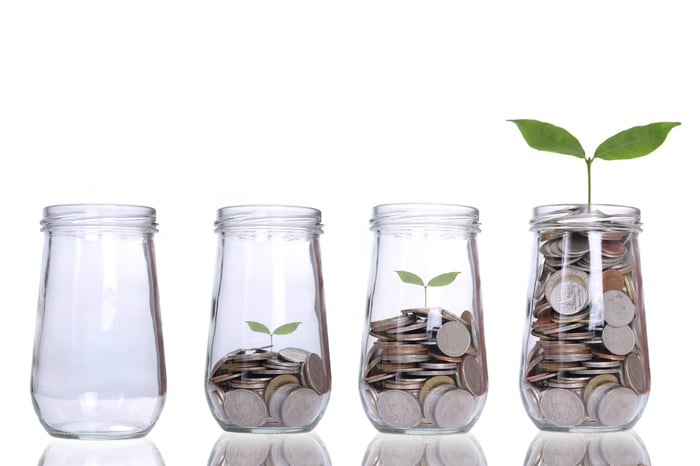 Although the market prices stocks based on a company’s future prospects, companies typically pay their shareholders dividends based on the actual cash they are generating today. If a company is able to maintain and pay its dividend even as its share price falls, it’s usually a sign that its leadership believes that any challenges will be short lived and that its core remains solid.

On top of that, dividends typically come in the form of cash. That cash is money you can use to shore up your emergency fund, cover some of your costs, or invest back into the market. Dividends during a bear market can be a great source of money to invest, as they represent cash already in your account that you didn’t have to sell a holding or sock away new money to have available.

5. You recognize your stocks are ownership stakes in companies

A share of stock is nothing more than a fractional ownership stake in a company. When you own stock, you really own part of that business. The market’s pricing of those shares rarely has any impact on the company’s ability to operate, profit, or pay its dividends.

If you liked a company well enough to buy its shares at $100 during a bull market, why wouldn’t you be even more excited to buy its shares at $40 during a bear market? As long as its operations remain solid and its prospects remain decent, a market crash gives you the opportunity to buy even more shares in the business for the same cash outlay. It’s one of Warren Buffett’s most successful strategies, and it’s one that’s just as available to us mere mortals as it is to the Oracle of Omaha.

Get ready for the next market crash

The market always moves up and down. If your financial life is structured around the assumption that stocks can only move up, you have every reason to worry about the next time the market crashes. If, on the other hand, you build your plan around the factors mentions above, you will be in a much better place to make it through the next market crash and emerge in a better spot on the other side.

A market crash can still be scary, but if you’re well prepared for it, you’ll have that many less reasons to worry about it.