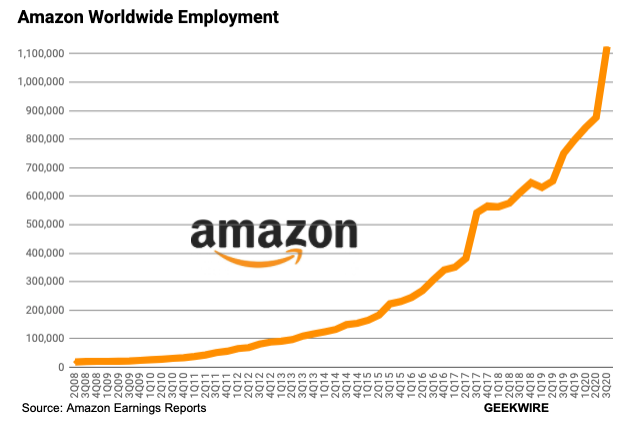 Amazon is on a massive hiring spree as it tries to meet rising e-commerce demand that has accelerated due to the pandemic and stay-at-home orders.

In its third quarter earnings report, the Seattle company said it added 248,500 new full- and part-time permanent employees from July to September. That means Amazon hired nearly 2,800 people each day during the quarter.

Amazon now employs a whopping 1.13 million people worldwide, up 50% from this time last year. It has already hired another 100,000 employees in October, Amazon CFO Brian Olsavsky said on a call with reporters Thursday. The company has added 400,000 positions in 2020 alone.

Olsavsky said Amazon continues to hire at a normal pace for tech roles in areas such as Amazon Web Services and Alexa. A majority of the exponential headcount growth is for its retail operations arm.

Amazon’s current total headcount is actually larger the figures noted above, as they do not include seasonal and contract workers.

The tech giant said this week that it would hire another 100,000 seasonal workers this year, bolstering its fulfilment and distribution operations for the fourth quarter. That’s on top of the 175,000 seasonal workers Amazon hired starting in March and April as the first stage of the pandemic confined many people to their homes. The company later converted 125,000 of those jobs into regular, full-time positions.

Separately, Amazon said last month that it was hiring 100,000 full- and part-time operations employees in the U.S. and Canada.

Amazon CEO Jeff Bezos focused on the company’s job growth in his statement as part of the earnings announcement. He specifically called on other large companies to increase their minimum wage.

“Two years ago, we increased Amazon’s minimum wage to $15 for all full-time, part-time, temporary, and seasonal employees across the U.S. and challenged other large employers to do the same,” Bezos said. “Best Buy and Target have stepped up, and we hope other large employers will also make the jump to $15. Now would be a great time. Offering jobs with industry-leading pay and great healthcare, including to entry-level and front-line employees, is even more meaningful in a time like this, and we’re proud to have created over 400,000 jobs this year alone.”

Amazon crushes Q3 expectations, sets record with $96.1B in revenue and $6.3B in profits

Amazon in 2018 raised its minimum wage to $15/hour for its U.S. workers, after facing pressure to boost compensation in its fulfillment centers and other facilities.

Bezos put forth a similar challenge in his annual letter to shareholders last year.

The CEO didn’t call out Amazon archrival Walmart specifically, though it has a lower minimum wage than what Amazon offers. Walmart announced a pay raise for 165,000 employees last month. It employs more than 2.2 million people worldwide.

At the outset of the pandemic, Amazon hiked hourly pay for workers confronting the coronavirus crisis by $2 an hour and doubled overtime pay. The company extended the pay increases twice, through April and May, before ending it in June.

Amazon in June said it would pay $500 million in bonuses to frontline workers and delivery partners.

Conditions for Amazon warehouse workers have been the subject of scrutiny and criticism from employee activists and politicians. Amazon has implemented safety measures in warehouses and fulfillment centers to help manage COVID-19 cases. The company said earlier this month that more than 19,000 workers had tested positive or been presumed positive for COVID-19, which it described as lower than the rate of positive cases in the general population.

The company now says it is conducting thousands of tests a day and will grow to 50,000 tests a day across 650 sites by November.

Amazon posted record revenue and profit for the third quarter, despite spending billions on COVID-19-related initiatives and hiring. The company reported $96.1 billion in revenue, up 37% from the year-ago quarter, and earnings per share of $12.37, up from $4.23 last year.

Amazon incurred another $2.5 billion in costs related to COVID-19 initiatives in the third quarter — $500 million more than expected — after incurring a $4 billion cost in the second quarter. The company said today it will incur another $4 billion cost in the fourth quarter. That cost includes expenditures to help keep employees safe; additional pay for workers; and for additional delivery capacity.

The company’s stock is up 90% since March and was trading at around $3,230 on Thursday before the market closed. Amazon’s market capitalization has risen to $1.6 trillion, right alongside Microsoft, which also beat earnings expectations this week. They trail Apple ($2 trillion) for the title of most valuable publicly-traded U.S. company.