If there’s one thing that could potentially shift investors’ focus away from early concerns about rising COVID-19 cases and the stalled state of stimulus, maybe it’s four FAANG stocks reporting the same afternoon. But that’s not until Thursday.

Mega-cap earnings could steal the spotlight this week, and it all comes down to Thursday after the close. Alphabet Inc (NASDAQ: GOOGL), Apple Inc. (NASDAQ: AAPL), Amazon.com, Inc. (NASDAQ: AMZN), and Facebook, Inc. (NASDAQ: FB) have all bunched up their earnings right then and there (whose idea was that you might wonder). With the earnings calendar so crowded, maybe people will even forget about the momentous nationwide event creeping up on us just a week and a day away. Well, probably not.

Ahead of the FAANGs, investors expect to hear from Microsoft Corporation (NASDAQ: MSFT), sometimes considered an honorary FAANG member, or a FAANG+, if you want to include it with its behemoth buddies. Other major companies due out include Boeing Co (NYSE: BA) and General Electric Company (NYSE: GE).

Before all the excitement, Monday starts on a bleak note due to worries about rising virus caseloads. It was an ugly weekend from a COVID-19 standpoint, and we’re seeing Wall Street react with stock futures stumbling and volatility charging back up. Some U.S. states and European countries are bringing back shutdowns, and that’s hurting some of the “reopening” stocks like cruise lines, restaurants, and airlines. This also could be why crude is getting whacked early Monday. Front-month U.S. crude futures (/CL) fell below $39 a barrel.

It’s good timing, then, that tomorrow brings a health checkup. Pfizer Inc. (NYSE: PFE), Eli Lilly And Co (NYSE: LLY), and Merck & Co., Inc. (NYSE: MRK) all take the spotlight, but focus might zero in on PFE for any updates about its COVID-19 vaccine. PFE said earlier this month it could file for emergency-use authorization of the vaccine by late November, assuming it receives positive efficacy and safety data from late-stage human trials.

Moderna Inc (NASDAQ: MRNA)—expected to report earnings Thursday—said the federal government could authorize emergency use of the company’s experimental COVID-19 vaccine in December, if the company gets positive interim results in November from a large clinical trial. MRNA’s call could also be a big Health Care attraction this week.

Some good news on the vaccine trial front popped up late Friday when AstraZeneca plc (NASDAQ: AZN) said it’s resuming its U.S. trial after a delay since September. More good news from AZN appeared on Monday when the company said its vaccine produced an immune response.

Getting back to Monday morning’s bitter cup of coffee, stimulus seems to be in deep freeze as the two sides traded barbs in Washington. At this point, anything happening before the election would be surprising. Some of the mild rise in stocks so far this month probably reflected people building in hopes for some sort of action from the capitol, and now it’s possible investors will claw back some of the premium.

Another reason stocks are in the green so far this month is earnings. Through the end of last week, 135 S&P 500 companies reported results, and around 84% topped Wall Street’s estimates, according to research firm FactSet. Earnings per share have beaten analysts’ projections by an average of 17.7%.

Take this in context, though, because it’s kind of like a participation trophy. Earnings are down on average more than 16% from the same quarter a year ago, and analysts have been generally projecting way too low most of the last two quarters. Also, earnings were already beginning to trend downward year-over-year even before the pandemic. So we’re talking about a very low bar.

As the week starts, earnings season is about a quarter of the way finished. The end of this week marks roughly the halfway point. Watch out this week for any companies that fail to meet Wall Street’s expectations, by the way. So far, the market has been punishing companies more than usual for missed earnings results, FactSet reported.

Today is light on data, but stay tuned for a big number later this week when the government shares its first look at Q3 gross domestic product (GDP).

Looking back at last week, there was a lot of noise in the media Friday about the Dow Jones Industrial Average ($DJI) having its first losing week after three weeks of gains. Softness in one $DJI stock, Intel Corporation (NASDAQ: INTC), knocked the $DJI down on Friday after another disappointing earnings report from the big semiconductor firm. It’s interesting, though, that semiconductor sector held up decently that day despite INTC.

Some of the big Industrial and Consumer Staples companies could benefit if the economy really is getting its feet back on the ground. That’s why it’s probably worth listening to what Caterpillar Inc. (NYSE: CAT) and Archer Daniels-Midland CO (NYSE: ADM) have to say on their calls this week. Both have been on the upswing since mid-year.

The 10-year Treasury yield could also be in focus today and throughout the week after it reached a four-month high above 0.85% intraday Friday. This seemed to help Financials last week, though they didn’t really get too much traction. It’s back below 0.82% this morning.

The leading sector last week was Utilities, which some investors tend to jump into when they want protection from volatility. Maybe they were onto something. The Cboe Volatility Index (VIX) didn’t really ring alarm bells recently, trading between 25-30, but that changed first thing Monday as volatility screamed upward ahead of the open to near the top end of that range. 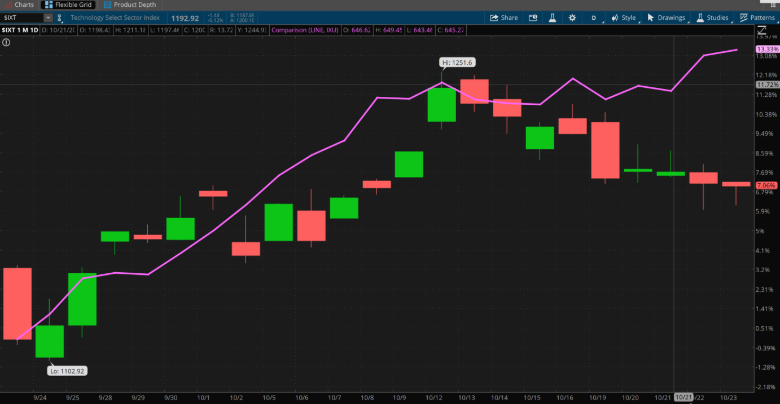 CHART OF THE DAY: LOSING GROUND. The high-flying Info Tech sector (IXT—candlestick) hasn’t been able to keep pace recently with the Utilities sector (IXU—purple line). Could this reflect investors getting cautious and squaring positions as the election gets closer? Perhaps. Data Source: S&P Dow Jones Indices. Chart source: The thinkorswim® platform from TD Ameritrade. For illustrative purposes only. Past performance does not guarantee future results.

Blast from the Past: Here’s something to help put today’s market in perspective: 1.32%. What’s that, you ask? It was at one point the all-time low for the 10-year Treasury yield, posted the week of July 5, 2016. Why bring it up now? Well, there’s been a lot of talk over the last few days about rising yields and their potential impact on economic growth and stock prices. A dip in the high-flying Information Technology sector late last week had some analysts citing the higher 10-year yield and its historic tendency to hurt growth stocks. And all this occurred when last week’s yield topped out at 0.86%. If you don’t feel like doing the subtraction, that’s 46 basis points below what for more than three years leading up to COVID-19 represented an all-time bottom.

When you look at these numbers and realize the yield still has to rise 53% just to get back to where it was in mid-2016 when Brexit fears sent investors into “safe havens” like Treasuries, you realize it might be a bit early to talk about possible rate-related slowdowns. With one caveat: The economy is somewhat recovered from its pandemic lows, but isn’t all the way back by a long shot. Unemployment remains near 8% and economic growth plunged more than 30% in Q3. Theoretically, that could make the market more vulnerable than usual even to a small climb in yields. If the 10-year yield reaches 1% and stays there, it could be interesting to see how the market reacts. For now, it’s probably too early to panic about growth stocks or to celebrate if you own Financial stocks.

Home Game: Since we’re talking rates, does that mean people who’ve thrived by having a home builder stock or two under their roof so far this year need to worry? Last week was a rough one for the major home-building companies. Shares tumbled for Lennar Corporation (NYSE: LEN), Toll Brothers Inc. (NYSE: TOL), KB Home (NYSE: KBH), and D.R. Horton Inc (NYSE: DHI). All three are now near their lowest levels in a month after what had been a strong October up till recently. It’s not just rising Treasury and bond yields (which ultimately can factor into mortgage rates going up). It’s also data-related, as new home starts for September were a bit below Wall Street’s estimates.

This, like higher yields, needs to be taken into context. First, single-family housing starts and building permits (a more forward-looking metric) both rose solidly in September. A big drop in multi-unit starts weighed on the headline number. Also, total building permits came in above expectations, which suggests demand remains out there. The September new home sales report, due this morning, should be watched closely for more insight. Remember, new home sales went bonkers in August, rising 43% from a year earlier to reach their highest since November 2006 on a seasonally-adjusted basis. That’s going to be hard to top.

Robes Around Biotech: The Supreme Court hears arguments next month on a case involving the Affordable Care Act (ACA), which has many investors focused on the health providers sector. Biotech might be another segment that sees an impact from any changes to ACA. One section of the ACA created a regulatory pathway for biosimilar drugs, or biologic medical products highly similar to another already approved biological medicine. Biologics are genetically engineered proteins produced by living cells, and, like biosimilars, treat conditions including cancer, immunological disease, kidney disease, and heart disease. If ACA is struck down, it’s unclear how that might affect biosimilars on the market or new approvals.

Anything that slows or prohibits biosimilar approval could actually be positive news for companies like AbbVie Inc (NYSE: ABBV) and Amgen, Inc. (NASDAQ: AMGN), which face possible competition from biosimilar companies (though AMGN also has a growing portfolio of biosimilars, which may balance out). It could also be bad news for PFE and Mylan NV (NASDAQ: MYL), which are among the biosimilars developers. Typically it takes months for the Supreme Court to rule after it hears a case, so keep this one in mind for a possible impact later next year.

Photo by Jason Briscoe on Unsplash