Will this be another weekend where investors wait for late-breaking news of a fiscal stimulus deal? Does it really matter to the market anymore?

After so many weeks, there’s a sense of exhaustion hanging around the trading arena. Our collective attention span has become shorter and shorter. It’s a little bit of covid exhaustion and probably everyone just wanting the election to be over. Pre-market trading might have reflected this as major indices pulled back from big early gains

Even while many U.S. states set one-day records for new COVID-19 cases, many people continue to hold out hope of a stimulus. However, with a particular event that doesn’t need to be named looming a week from Tuesday, it’s getting a little hard to keep up the optimism about Congress acting.

The last few days featured relatively tepid trading in stocks, with the market firmly stuck in a range it’s been bouncing around for nearly a month. That’s roughly 3300 to 3500 for the S&P 500 Index (SPX) and 11,500 to 12,000 in the Nasdaq 100 (NDX). Unlike four years ago when stocks skidded into the election as concerns and fear rose, it’s been pretty placid this time around. To date, that is.

Even volatility—which some analysts thought would move up as the election approached—has been behaving itself. The Cboe Volatility Index (VIX) now is bouncing between 28 and 30 after trading in a wider range of 25–30 earlier this month.

There’s still plenty of time for things to get more exciting ahead of Nov. 3, and anyone making trades today or next week should be aware of that. However, some of the risk-on indicators like bonds and the dollar continue to sink, and gold also fell steeply on Thursday after a strong day Wednesday.

You could argue that the dollar and bonds might be getting hurt by concerns about inflation if there’s a fiscal stimulus, but gold—though it’s still high historically—hasn’t been telling the same story. The 10-year yield starts today at 0.86%, a three-year high. Crude and gold are up just a tick.

Seeing yields up along with stocks this morning was a bit of a shocker, because that’s the way stocks and bonds traditionally move. There’s a more normal relationship for now between bonds and the market after it looked a bit screwy for a while.

While the yield rally put steam into the Financials sector, it might be chilling investor excitement about some of the “growth” sectors like Info Tech, which fell Thursday. Higher rates typically give bank stocks a lift by increasing their profit margins, but weigh on growth stocks that can be more sensitive to higher borrowing costs.

Having said that, Energy also moved higher Thursday and companies in that sector are among the biggest borrowers. A 1.5% rally in crude probably didn’t hurt. And travel and Industrials were also up. Boeing Co (NYSE: BA) rose more than 3%, Booking Holdings Inc (NASDAQ: BKNG) climbed 5%, and Expedia Group Inc (NASDAQ: EXPE) is up around 9%. Is this a sign that people are going to start traveling more?

Data To The Rescue For Treasury Yields, Or Is It Inflation Fears?

Another factor behind the yield rally could be data continuing to look better than expected, hinting that the economy might be gaining traction. Initial jobless claims fell to 787,000 last week, the lowest level since the pandemic began. Existing home sales hit a home run in September, climbing 9.4% month-over-month and nearly 21% from a year ago.

The Treasury market seems pretty convinced more government stimulus (along with a bigger supply of Treasury notes) is on the way, judging by the fact that the 10-year yield is up around 16 basis points from recent lows. Some of this might be a sign of inflation concerns as investors contemplate a possible stimulus with maybe trillions of government dollars hitting the economy, but it’s hard to get too caught up worrying about potential inflation driving up rates when yields remain only 30 basis points or so off their all-time lows.

Looking at the claims number, you never want to lean too much on one week of data. Still, it’s interesting that the government downwardly revised the previous week’s claims, too, which had been on the high side. Another week of downwardly trending numbers and maybe we’re onto something. Time will tell.

Today’s earnings calendar is a bit light, as you’d expect on a Friday. American Express Company (NYSE: AXP) is one of the only notable firms reporting this morning, and its shares fell amid results that reflected pandemic-related struggles. Its products are used a lot by business travelers, and very little business travel is happening. It’s actually shocking that their revenue beat expectations.

Today’s schedule is the calm before the storm, because next week might be the peak for influential earnings reports.

At this point, next Thursday afternoon looks like the showstopper, with AAPL, AMZN, FB, and GOOGL all reporting after the closing bell. That’s a lot of juggling, so remember if you do plan on trading any of these off of earnings, do your research and carefully listen to what the executives say on their calls. There’s no point in trying to be a hero by being first in or first out.

We’ll talk more next week about most of these companies’ earnings, but let’s leave off by noting that PFE and BA could stand out in terms of drawing interest to their calls. Investors are probably excited to hear the latest on PFE’s COVID-19 vaccine, and on BA’s plans to get the 737-MAX back into the sky.

On the topic of COVID-19, the U.S. Food and Drug Administration’s (FDA) approval of Gilead Sciences, Inc.’s (NASDAQ: GILD) remdesivir as a treatment stirred some excitement in the market this morning. GILD shares rose 4%. Keep in mind that this isn’t necessarily a game-changer because the product has been used in COVID-19 treatment already for months. Earlier this year, a large controlled study of remdesivir in the US found that it shortens recovery time by about one-third in severely ill, hospitalized adults with COVID-19. 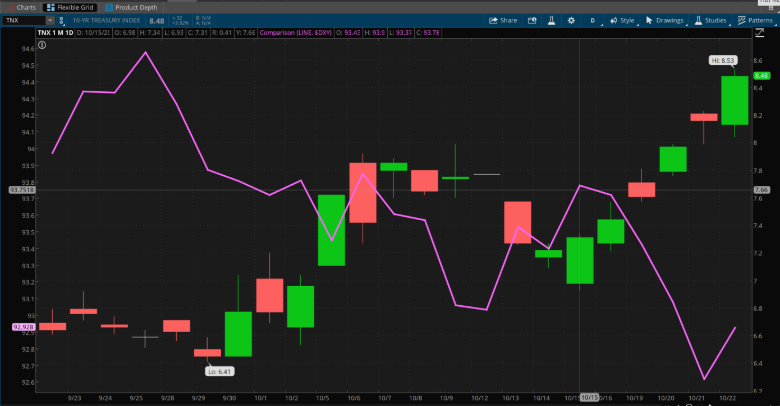 CHART OF THE DAY: RELATIONSHIP THERAPY NEEDED? The 10-year Treasury yield (TNX— candlestick) and the dollar index ($DXY—purple line) often trade in sync, but that’s not happening now. Even as yields soar, the dollar sags. Why? It could reflect worries about inflation hurting the dollar and heavier Treasury supplies weighing on fixed income (where yields rise as prices fall) if the government does pass a fiscal stimulus. Data Sources: Cboe Global Markets, Intercontinental Exchange. Chart source: The thinkorswim® platform from TD Ameritrade. For illustrative purposes only. Past performance does not guarantee future results.

One Consideration as Covid Cases Climb: Virus caseloads keep rising both here and in Europe, which could be one reason the market’s had a tough time gaining much traction this week. One thing medical experts say to watch in the days ahead is hospitalizations and deaths vs. cases. That is, the number of cases might keep rising, but if hospitalizations and deaths don’t climb equally with cases (and remember there’s often a time lag between rising cases and rising hospitalizations) it could point to better treatments and care techniques having a positive impact.

This isn’t to minimize the potential pain and suffering. But the pain to both patients and the broader economy might not be as dramatic as last spring if these new treatments help people recover faster and avoid getting sicker in some cases. Also, both Pfizer Inc. (NYSE: PFE) and Moderna Inc (NASDAQ: MRNA) are now expected to file for vaccine approval before the end of the year, though it’s unclear how quickly those will be available. All this could help explain why the market’s been holding up pretty well here as some experts say we’re in a new wave, unlike last spring when the first wave of the virus caused markets to tank worldwide.

Subbing for Subs: With Netflix Inc (NASDAQ: NFLX) earnings earlier this week, pressure on the stock was all about disappointing subscriber (or “sub,” in industry talk) growth. A lot of that appeared due to “pull-through.” In normal language, that means the company’s historically massive subscriber gains earlier this year as the pandemic sent everyone home to their TV sets and laptops basically “pulled forward” subscribers who normally would have signed up later in the year.

For investors who follow subscriber-based communications companies like NFLX, Zoom Video Communications Inc (NASDAQ: ZM), and Slack Technologies Inc (NYSE: WORK), it might be time to stop obsessing over “sub adds.” Instead, consider thinking more about the huge amount of revenue these huge subscriber bases might bring and how the companies plan to monetize their base, says my fellow TD Ameritrade Network* contributor Shawn Cruz, Trader Business Strategy Manager, TD Ameritrade. A lot of these firms are fee-based, and that brings in a steady stream of cash flow moving forward. Once customers sign on, they can sometimes be sticky and not migrate to competing platforms.

That could give companies more leverage if they decide to increase prices over time, meaning investors might want to focus more on their pricing strategy than new “adds,” especially in markets where the subscriber base may be saturated. Remember this advantage in coming quarters when NFLX seems likely to continue falling short of early 2020’s incredible subscriber growth.

Homework Assignment: We’re seeing signs that worker productivity is off the charts, and that ironically could partly be due to the pandemic. Most office workers are at home, and that could be making them more likely to put in extra hours. After all, if it’s 7:30 p.m. and you’ve been home all day anyway, you might decide to check your work email. A lot of people appear to be doing that, though not every industry can accommodate working at home (airlines, for instance).

All this productivity probably helps the Info-Tech sector. Check Intel Corporation (NASDAQ: INTC), for instance, which reported earnings late Thursday. Though the company’s data center sales fell more than expected in Q3, INTC partly made up for that on the traditional PC side, where demand is surging. Shares of INTC got chopped by around 8% in pre-market trading, however, as Q4 revenue guidance fell short of Wall Street’s expectations.

Commodity prices have down week

The Stock Market Phenomenon That’s Turned the Nasdaq Upside Down

The Stock Market Phenomenon That's Turned the Nasdaq Upside Down