And as you know, his three picks were the following:

Those are three strong picks.

But today, I’d like to also chime in – and give you the very best pick to immediately buy if Trump pulls off another crazy upset.

You see, in my opinion, the VERY BEST name to buy in this situation is the SPDR S&P Aerospace & Defense ETF (NYSE: XAR).

It mirrors the returns of the S&P aerospace and defense sector. Year to date, it’s down 16.56%. So it’s one of the true “bargains” available to you right now.

But unlike most defense plays, which hold the bigger names – such as Raytheon, Lockheed Martin, General Dynamics or Northrop Grumman – the SPDR S&P Aerospace & Defense ETF is appealing to me because it offers you exposure to one of the most promising sectors around: space.

Take a look at its top 10 holdings:

Allow me to note some highlights…

Oh, and you also get Axon Enterprise, which sells nonlethal Tasers and body cameras – and I believe these will soon be found on every law enforcement officer in America.

From a chart perspective, consider its past two sell-offs…

In late 2018, this collection of companies dropped over a two-month period – only to fully recover and achieve new highs over the following 10 months.

And most recently, the COVID-19-based sell-off in March and April has already seen the SPDR S&P Aerospace & Defense ETF begin to recover, which is ongoing right now. If the last sell-off and bounce pattern mirrors that of 2018, then it’s reasonable to think it could soon retest and move above the previous high around the $120 level. 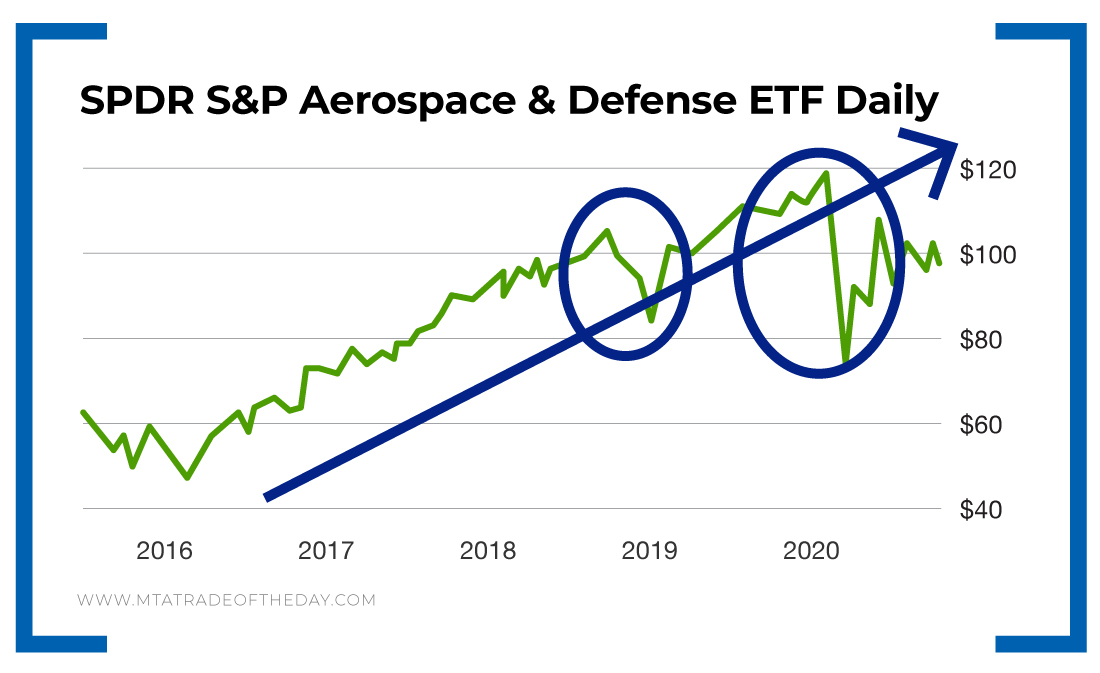 Action Plan: If Trump pulls off another crazy upset – or even pulls close in the polls – the SPDR S&P Aerospace & Defense ETF would be the top name on my buy list.

No other stock gives you a better collection of defense and space – both sectors that’ll continue to grow in 2021 and beyond.

And in case you missed the announcement… we launched our brand-new service, Trade of the Day Plus!

I hope you’re excited because you’ve been asking for this service for quite a while, and now it’s finally ready to get unleashed.

If you want our best picks – delivered via video every Wednesday after the close – then we invite you to be among the very first new members of Trade of the Day Plus!

Bryan graduated with a business degree from the highly rated Indiana University Kelley School of Business, and his first job out of college was trading stock options on the floor of the Chicago Board Options Exchange. He was mentored by some of the country’s top floor traders in the heart of the technology boom from 1999 to 2000, where he learned to identify and implement some of his most powerful trading secrets. Now he shares his secrets with a group of elite traders. We will be republishing some of his highly sought after content from his free e-letter, Trade of the Day.