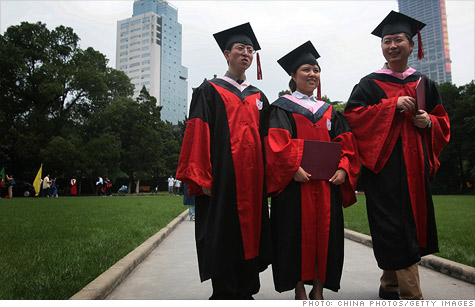 Doctoral graduates from Nanjing University in China pose for a photo.

NEW YORK (CNNMoney) — Low-wage, unskilled labor was once its competitive edge, but now China is quickly rising as the world’s largest supplier of college-educated workers.

By 2030, China alone will account for 30% of the world’s new college-educated workers, predicts a study by the McKinsey Global Institute.

“Investments in education that China made much earlier are now paying off,” said Anu Madgavkar, a senior fellow for the McKinsey Global Institute. “China invested in opening a lot of schools and they ramped up college enrollment.”

China is also churning out far more science, technology, engineering and mathematics grads, giving it a leg up in some of the world’s fastest growing sectors.

Overall, the results of the study point to a global need for more college grads. It predicts employers around the world will be faced with a shortage of 38 million college-educated workers and a surplus of 90 million unskilled workers in 2030.

“An unprecedented level of response is required to raise education rates and then on the other hand, we also need a concerted effort to create more jobs for low-skilled workers,” Madgavkar said.

In advanced countries, the imbalance is worrisome because it could lead to more income inequality and long-term joblessness, the report said.

“The polarization of incomes between high and low-skill workers could become even more pronounced, slowing the advance in national living standards, and increasing public-sector burdens and social tensions,” it said.

And in developing countries, the shortage of high-skilled workers could stunt innovation and growth.

Madgavkar’s calculations predict that Chinese employers will need 140 million college-educated workers in 2020, about 23 million more than the country will be able to supply.

With roughly 1.4 billion people, China is the world’s most populous nation and the second largest economy. Its workforce of 475 million people accounts for roughly two thirds of the entire global labor force.