This article was written exclusively for Procurement Nation

Everyone seems to want to buy the next hot electric vehicle company or the next great biomed breakthrough. Yet sometimes it’s the mundane industries we take for granted that are undergoing quieter transformations, albeit ones that will bring serious profits to the bottom line.

As the current lesson of COVID-19 and the rise of respiratory ailments shows us, better filtration for transportation, business and residential use is essential for good health. Add to this the less-developed regions of the world becoming ever more able to afford creature comforts and to filter pollutants from their outside air, and we have a growth business.

Our lives would be far less comfortable and might be in greater danger without Heating, Ventilating and Air Conditioning (HVAC), now more and more frequently mentioned as HVACR (Heating, Ventilating, Air Conditioning and Refrigeration.) Though it doesn’t flow off the tongue quite as mellifluously, that “R” is a big part of quality of life—as most recently brought home by the Pfizer (NYSE:) vaccine’s need for serious refrigeration.

Hundreds of millions of people the world over still toil in the dead of winter or the dread of summer without respite from either. Social media will not change their lot in life, nor give them a good night’s sleep. But better indoor air quality, the certainty of warmth when needed and air conditioning on the hottest muggy nights, may well do the trick.

For those in the most developed nations who already take these things for granted, crowded trains, crowded buses, and crowded airplanes are in need of vastly superior ventilation systems that exchange air more frequently and remove pollutants and slow the spread of disease.

All of this is what they do in the seemingly mundane, but actually more and more hi-tech, HVAC world. Which HVAC companies are likely to benefit most as the world demands higher comfort, better food safety and fresh, disease-free air?

According to Market Research Reports, below, seven major manufacturers are the beneficiaries of roughly 90% of all US shipments of HVAC equipment. Under the rubric of HVAC, I include dehumidification, refrigeration, fire safety, air movement, and energy recovery as sub-categories since all these are manufactured by one or more of these firms in pursuit of better comfort, greater safety and higher food and air quality.

Worldwide, there are some 25 such firms. I will limit our discussion, for now, to the two I own and the one I like best today. Both have a global presence.

One is headquartered in the US, the other in Japan (and has US ADRs).

15 Biggest VR Companies in the World

Let’s look at each of these two in turn:

Carrier Corp (NYSE:) became a stand-alone public company after being spun off by United Technologies (NYSE:) on April 3, 2020. 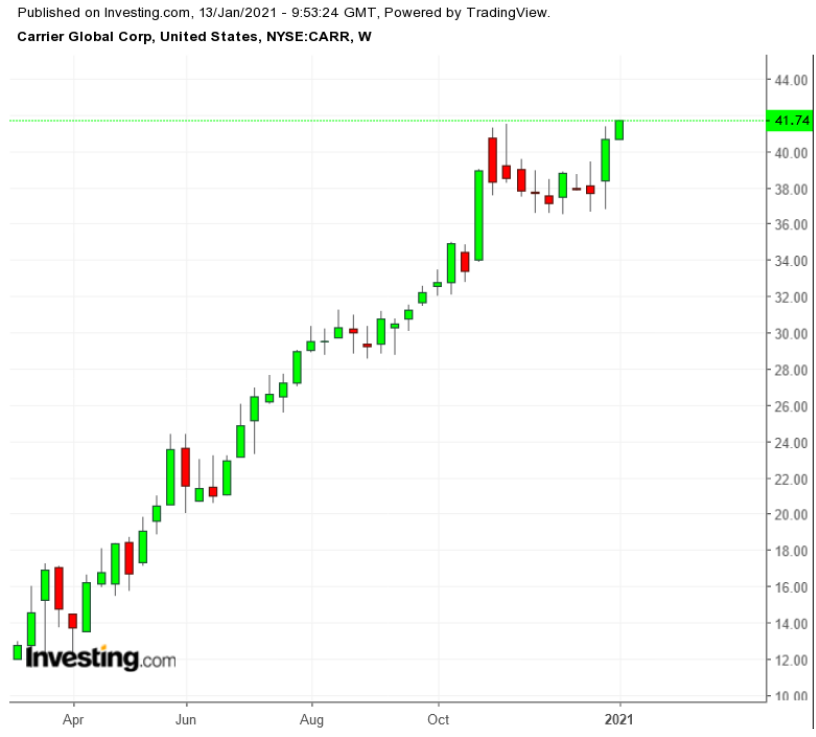 I bought the stock for our Investors Edge® Growth & Value Portfolio on June 11. It’s up 80.4% since then.

Carrier may be the best-known name in the business for US-based investors. Like many brilliant inventions that led to the birth of a fine company, this one bears the name of its founder. Willis Carrier is credited with inventing modern air conditioning in 1902. In 1915, he and six fellow engineers put together a total of $32,600 to form the Carrier Engineering Corporation. The rest is history. He and his fellow investors/founders/engineers realized that to truly cool a space you needed to control not just air circulation, but also humidity and temperature. And it would be ideal to cleanse the air as it recirculated via some sort of filter. Temperature, humidity, ventilation and cleansing—voila! You have today’s air conditioner.

I think Carrier’s future today is brighter than ever. Regrettably, for those considering purchase right now, I think it is close to fairly-priced. Still, it is worthwhile to learn about it in case its prospects change radically for the better and as a basis of comparison for the company I bought more recently, which I think may well see similar price appreciation.

That isn’t unusual for big HVAC companies. What makes Carrier different is that only about half of its business comes from HVAC and the other half from a combination of fire and security products, installation and maintenance, and refrigeration equipment and servicing.

With 85% of Carrier’s sales in the U.S. and Europe I see an opportunity to expand into many of the higher-growth developing countries that desperately need refrigeration and air conditioning in particular. When I was a defense attaché in Myanmar (Burma,) I saw so much spoilage, so much afternoon downtime. It is amazing what a difference something we take so for granted, HVAC (+R!) could make in nations like these.

While I like Carrier a lot, I like its larger rival (world-wide) at its current price even better. HVACR may not seem like the sexiest of industries, but I believe both Carrier and Daikin Industries (OTC:) will see revenue growth stemming from the confluence of climate change, perception of even greater climate change, the growth of the middle classes in emerging markets, and increasing urbanization everywhere, which makes installations easier and cities ever hotter. Black roads, black roofs, black cars, etc. all sink heat into these areas. The lighter colors of rural and agricultural areas, not so much.

In the developed world, our latest rage for the Internet of Things things will most likely favor the HVACR companies that have the deep pockets to upgrade and digitize to prioritize commercial adaptation and residential comfort. And it is not just the House of Representatives and the Electoral College that will change as more people give up on the internal politics of states like California and New York, both of which are losing population of late.

Those leaving seem to be heading mostly to Florida, Arizona, Nevada (go to the south please; we rural ranchers and farmers up north have enough people already!), New Mexico, Texas and the Ozarks. These are places that have a definite need for temperature and humidity control.

As well, the latest cloud data centers are just one example of a whole new industry that requires a prescribed range of temperatures to function. They cannot rely upon ambient temperatures to protect their expensive investments.

Daikin was founded in 1924, just 11 years after Willis Carrier started his company. Supplying high-quality product in Japan and the rest of Asia, Daikin did not enter the North American market until 2004. However, It did so in a big way, with the purchase of McQuay International, a U.S. firm nearly as old as Carrier itself, that designed, manufactured, and sold commercial, industrial and institutional heating, ventilation and air conditioning products.

Located just outside of Houston, the Texas Technology Park makes it easy for Daikin to consolidate manufacturing, engineering, logistics, marketing and sales for Goodman®, Amana® and Daikin brand heating and air conditioning products in one location.

If you have ever spent a summer in southeastern Texas, you know Daikin must have a great deal of faith in its products; it trusts them to keep the temperature where it needs to be for manufacturing in that location! 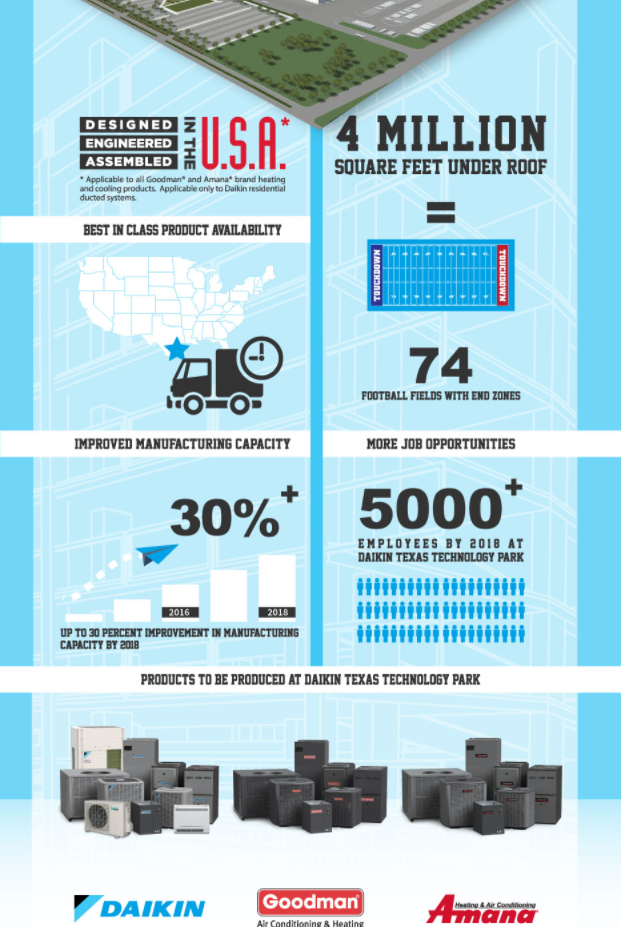 Daikin, like so many Japanese industrial and manufacturing innovators, has their finger in many pies. While I see them succeeding in Africa, the Middle East, their own backyard of East and Southeast Asia, I also see their studied entry into North and South America as bearing fruit in the HVACR business. Already the biggest, I think they may still have the best runway for future growth.

Daikin is an innovator and patent-holder in a number of chemicals and follow-on products, like fluorocarbons, fluoroplastics. fluoro coatings, fluoroelastomers, mold release agents, oil- and water-repellents, pharmaceuticals (!), semiconductor-etching machinery, industrial hydraulic equipment and systems, and even in defense systems.

I had the pleasure, long ago, of working with the JSDF (Japan Self-Defense Forces). I have followed their progress ever since. Living next door to China, the JSDF must be ever-watchful, ever-prepared. The Japanese government tends to source their self-defense weaponry mostly from home industries and its most-trusted allies.

Daikin is one of those home-grown manufacturers. It supplies small arms and heavy weapons, warheads, grenades and other explosives, aircraft parts and medical equipment to the JSDF.

Going back to the HVACR side of the business, which still provides the bulk of the company’s revenue and earnings, Daikin’s relatively recent positioning in the US market could not have come at a better time. With rates this low I believe homebuilding will continue to be on a tear into 2021—and Daikin will be one of the major beneficiaries of newbuild construction. Then, of course, is the retro fit, market for those who want the greener, newer, more efficient HVAC equipment as well as inverters for solar and other applications.

While I see great demand, at least in the next couple years, for newbuild and retrofit demand in the USA, the real market is in the rest of the world that currently has little or no air conditioning.

According to the latest figures (2020), there are less than 2 billion air conditioning units in the world. These are mainly concentrated in the United States, China, Japan and South Korea. Projections by the International Energy Agency (IEA) predict an increase to 5.5 billion units globally by 2050. If powered by renewable electricity sources I can see a world where the IEA’s numbers might be well on the low side. 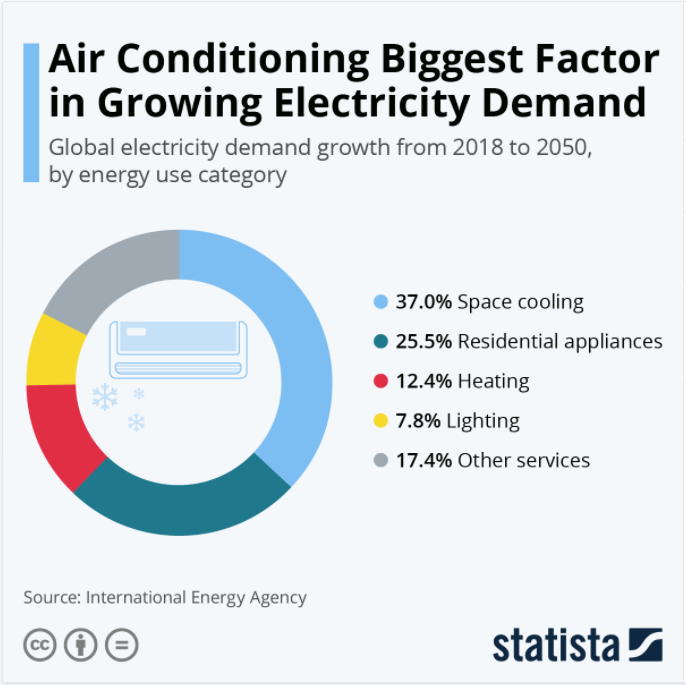 Also from the IEA: as of 2019, of the 2.8 billion people living in the hottest parts of the world, only 8% currently possess air conditioning. India is predicted to be the world’s most populous nation in the coming decade, with places like near-equatorial Nigeria and equatorial Indonesia not far behind. The market potential here is stunning.

I think Daikin is sitting in the catbird seat for those willing to take a long-term view, by which, these days, I mean longer than next Tuesday. The U.S. ADRs average a daily volume of 90,000 shares plus, so liquidity is not an issue.

Daikin’s annual year ends in March. Here are the estimates from the 16 analysts globally that follow the company for revenue estimates.

Over the past 5 years, Daikin has been a fine performer. It has paused just a little this past month. I own it already—but, for all the reasons mentioned above, I am looking to add on this pullback. 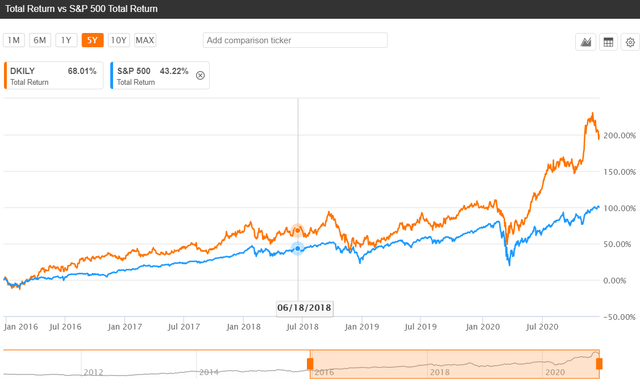 Caveat: Unless you are a client of Stanford Wealth Management, I do not know your personal financial situation. Therefore, I offer my opinions above for your due diligence and not as advice to buy or sell specific securities.

15 Biggest VR Companies in the World