Apple (NASDAQ:AAPL) investors, start sending thank-you cards to the wireless carriers. It’s no stretch to suggest that their current deals represent the most aggressive iPhone promotions most customers have ever seen . Carriers believe customers have a huge appetite for the 5G iPhone lineup and will ultimately pay for additional 5G services in the future. However, Apple stands to be the main beneficiary of this upgrade cycle. The hardware and services company could see record iPhone revenue in the next calendar year, and its services revenue could benefit for years to come.

Do customers really care about 5G?

According to VentureBeat, Apple will be the catalyst for consumers’ widespread 5G adoption, “singlehandedly generating tens of millions of 5G phone sales and officially launching the 5G era.” Wedbush Securities analyst Dan Ives said of the iPhone 12 lineup, “I believe it translates into a once-in-a-decade type upgrade opportunity for Apple.”

For anyone who hasn’t been inundated with commercials from AT&T, T-Mobile, or Verizon about what 5G does, it’s essentially the next evolution in wireless. 5G promises better data speeds, better coverage, and new experiences. 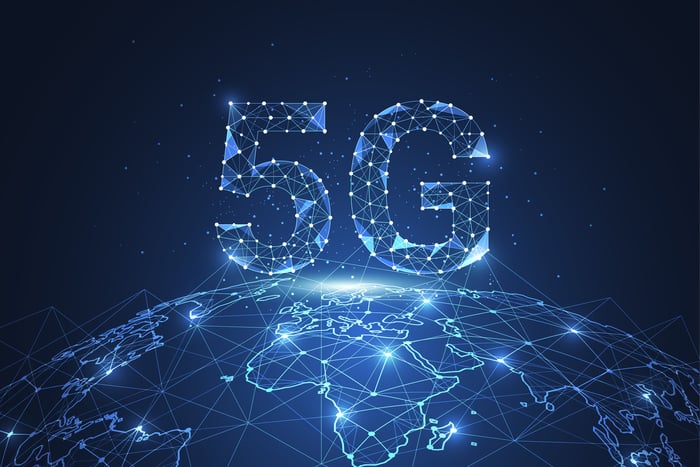 According to data collected by Ericsson, customers worldwide aren’t fully satisfied with their current wireless experience.

5G offers possibilities that customers are interested in, yet the devices are expensive, and the networks aren’t up to par yet. Wireless carriers are desperate to justify the billions they are spending on 5G networks. If giving away a 5G-capable iPhone will win customers, that is what they are going to do.

Since wireless carriers moved away from contracts, each new wave of devices has caused a ripple effect of new promotions. As an example, in late 2017, Apple introduced the iPhone 8, 8 Plus, and the iPhone X. Carriers focused some of their best promotions on the iPhone 8 and its retail price of $699.

In a similar manner, aggressive promotions at the end of 2020 could mean a record-breaking first quarter of 2021 for Apple.

The iPhone 12 sells for $799.99, which means four devices would normally retail for $3,199.96. Carriers don’t pay full retail price for each device. However, they will have to hold onto these new customers to generate enough service revenue to offset the equipment cost. In the meantime, Apple reaps the benefit of millions of customers getting their first 5G iPhone.

To get a sense of how 2021 could go, it makes sense to look at the last big upgrade cycle.

Research from Statista found that in 2018, the average smartphone lifecycle was 2.74 years. For 2020, customers are projected to keep their device for 3.17 years.

Since many of the devices acquired in Q1 2018 would have been financed on a 24-month installment plan, calendar year 2020 should have been a heavy upgrade year. However, the pandemic has forced wireless customers to stay inside, millions are out of work, and pretty much everyone knew a 5G iPhone was coming. According to Piper Sandler analyst Harsh Kumar, Apple may sell as many as 73 million iPhones during the December quarter.

In the last big upgrade cycle, the iPhone average selling price (ASP) was $796 for Q1 2018. Though some of this ASP was from the $999 price for the iPhone X, there are at least three reasons to believe Q1 2021’s ASP could be higher.

Apple’s iPhone revenue on 73 million units with an ASP of $907 would be $66.2 billion. This performance would represent an increase of 18% annually. In short, Apple could be about to post its fastest Q1 iPhone revenue growth rate of the last several years.

As iPhone sales go, so does the company’s services revenue. It’s no coincidence that after the last big iPhone upgrade cycle, Apple’s services revenue climbed nicely. In Q1 2019, services revenue grew by 19% annually. By Q1 2020, services revenue growth clocked in at 17% annual growth. The more active iPhones, the more services can be sold to these users. The iPhone 12 lineup could begin a multiyear virtuous cycle where iPhone hardware revenue jumps in calendar year 2021, followed by increased service revenue in 2022 and beyond.

After a negative response to Apple’s Q4 2020 earnings, investors seem to be missing the bigger picture. Wireless carriers are practically guaranteeing the iPhone 12’s success by giving the device away. The short-term downdraft in the hardware and services company’s stock, could be an opportunity for FAANG investors to chew on the idea of acquiring Apple shares.