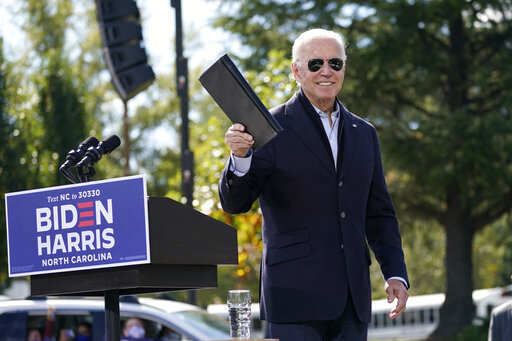 I don’t know who’ll prevail in the U.S. election. But one thing we can probably all agree on is that incumbent leader President Donald Trump has had an extraordinary impact on the global oil market. From crippling the oil exports of Iran and Venezuela to taking credit for brokering the biggest-ever voluntary production cuts, Trump’s fingerprints are all over.

The U.S. oil industry
Things will carry on pretty much as they are if Trump retains his place in the White House. I couldn’t find any new initiatives on his campaign website, while the specific achievements listed on his energy and climate page consist mostly of reversing his predecessor’s actions.

The headline accomplishment of opening more leases and expanding offshore oil and gas drilling may not be all it seems. Fewer than 1% of the Gulf of Mexico blocks offered for lease attracted bids in the six completed sales so far during Trump’s presidency, according to documents posted on the Department of Interior’s website. Results of a seventh sale are due to be announced next month.

Contrary to what Trump has claimed, Biden’s platform does not include a ban on fracking, the process of fracturing tight rock formations by pumping water, sand and chemicals into them under high pressure in order to extract gas and oil.

Whoever wins, they’ll face a landscape where both domestic and global reserves of oil and gas are the highest they’ve ever been. At a time when most forecasters see a peak in oil use by 2040, known reserves are sufficient to maintain current production levels for another 50 years.

Neither the U.S. nor the world at large has a shortage of already-discovered oil under the ground. But both are clearly facing a shortage of pristine wilderness. 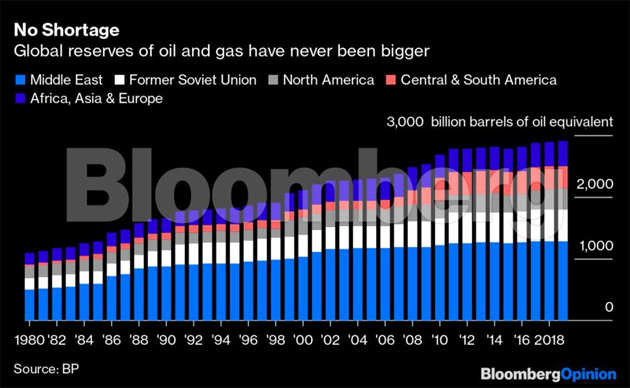 A shift in White House policy toward tackling global warming may impact oil and gas jobs. But a green energy program could utilize the skills of laid-off oilfield workers — whether that’s supporting offshore wind farms or plugging the 3 million or so abandoned U.S. oil and gas wells that are leaking copious amounts of methane, a powerful greenhouse gas, into the atmosphere.

The international oil industry
The Trump administration’s “maximum pressure” campaign against Iran has halved the country’s oil production and choked off most of its exports. Its shipments of crude and refined products are now limited to China, Syria and Venezuela, with small volumes of oil perhaps smuggled elsewhere. Sanctions on Venezuela have helped to drive production in what was Latin America’s biggest oil producer down to its lowest level in nearly 100 years, according to figures published by DeGolyer and MacNaughton. 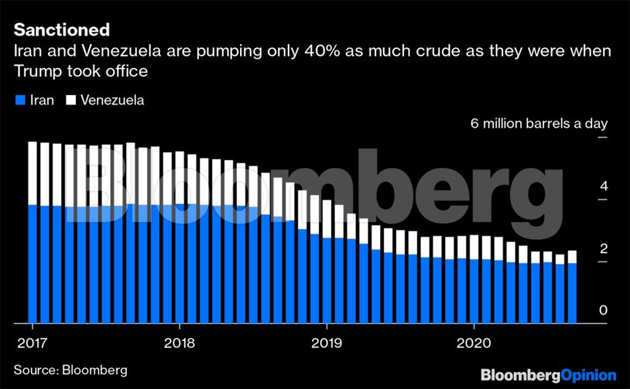 Producers in the Organization of Petroleum Exporting Countries and their allies would have had a much harder time trying to balance oil supply to the Covid-triggered collapse in demand if those two countries were still pumping 5.8 million barrels a day as they were when Trump took office.

Under Biden, I wouldn’t expect a sudden easing of the sanctions on either Iran or Venezuela. Bringing the U.S. back into the Iran nuclear deal is a policy goal, but it may not be high on his agenda. What is more likely is that both sanctioned countries would test U.S. resolve to police its current restrictions. A Biden presidency probably couldn’t let either country flout them without losing leverage. It would be much harder, for example, to bring Iran back into full compliance with the nuclear deal if it could already export all the oil it wanted.

OPEC
Trump’s taken a keen interest in OPEC’s doings. He swung from Twitter diatribes against the organization and its allies to helping broker their biggest ever output cut earlier this year. He was pushing on an open door — OPEC’s de facto leader Saudi Arabia and newfound OPEC+ ally Russia had already realized the error of letting their earlier cooperation collapse. In the end, Trump’s contribution appeared to be offering some vague compensation for Mexico’s lack of cuts, which in practice seems to be little more than an accounting trick.

A Biden presidency is unlikely to have anything like the same influence on OPEC. He has signaled he intends to take a much tougher line with Saudi Arabia and others on human rights. That will win him few friends on the Arabian Peninsula. 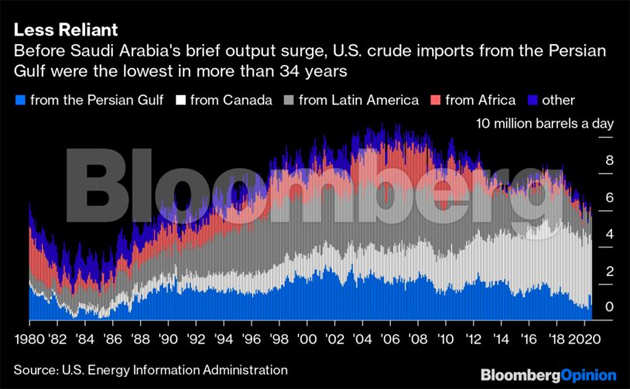 But history is on America’s side, at least from an oil perspective. The U.S. is far less dependent on Middle Eastern oil than at any time since the mid-1980s. And OPEC+ oil producers need to keep prices high enough for their own economic needs, so they’re likely to keep managing supply even without exhortations from the White House.

But the absolutely No. 1 impact of a change of president would be none of these. It would be the impact on broader markets, the appetite for risk among investors and traders and the value of the dollar.

Oil prices have been sent soaring and plunging by Trump’s words (spoken or tweeted) and deeds. A reversion to a less in-your-face style of leadership (if that’s the outcome) will reduce the gyrations. That may lead to a steadier oil market, but it will also be less fun to write about.

‘One of the most confusing weeks of my career’

Govt. supplies over $1.4b for imports of edible oil, oilseeds in 7 months