Oh No, Someone Save Netflix (NASDAQ:NFLX) 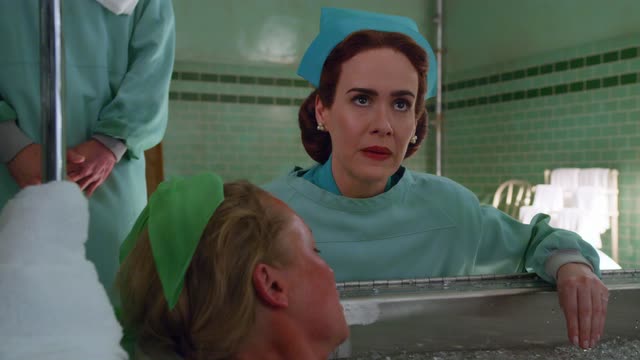 Oh No, Somebody Save Netflix…

Let’s face it. The online streaming giant, and the creator of some of the best original content in the world, Netflix (NFLX) came out with some far worse than expected numbers in Q3.

Now, here is the number that really counts:

Net adds: Just 2.2 million vs the anticipated 3.57 million global adds, a staggering miss of around 38%.

I have been a user of Netflix since around 2008, when they were mostly sending out DVDs, and were just getting into their streaming business. I’ve been a very fortunate investor in NFLX since around 2011. I’ve written numerous bullish articles on Netflix, and I even did an interview on a financial program a while back when the stock was trading at around $188. However, in all of my years of covering this stock I do not remember seeing a subscriber miss quite as large as this one. 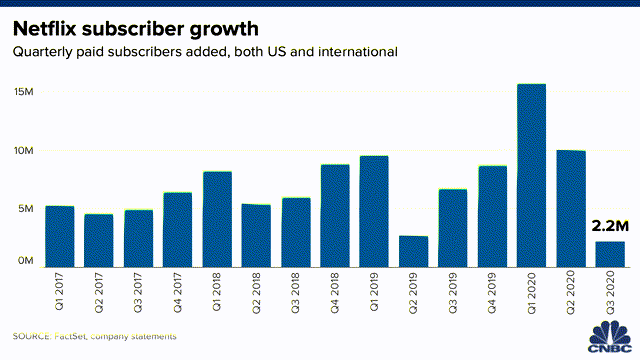 As we can clearly see in the chart above, Netflix has not had a quarter with such poor QoQ subscriber growth since at least the start of 2017. Furthermore, after sifting through some data I found that this was the lowest QoQ growth quarter that Netflix has had since Q2 2014. 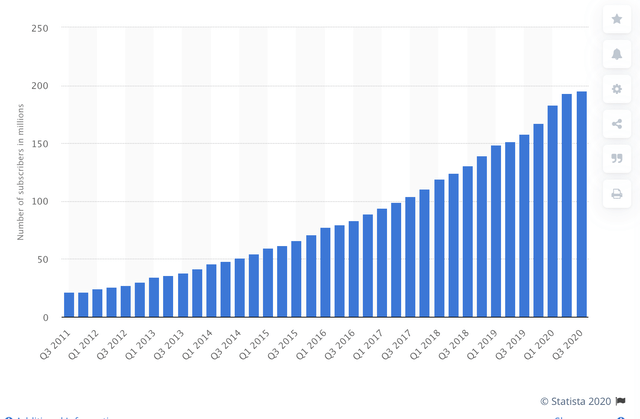 This longer term chart seems to indicate that growth may be fizzling out, flat-lining, or dare I say, may possibly even start to decline in the future. But no, not so fast, I think not. Let’s not forget that Netflix just put up two incredibly strong blockbuster quarters in H1 2020. The company added a remarkable 25 million net adds it the first half of this year, by far the best back to back quarters in the company’s history. Some kind of “hangover effect” was to be expected, and we are seeing it now.

Moreover, we are likely to see more of this in Q4 as well. The company already said that it expects to produce roughly 6 million net adds in Q4 2020, well below the 8.8 million users Netflix added in Q4 2019. Well, quite honestly that’s OK.

Supposing the company’s net adds increase by roughly 6 million in Q4. This would put Netflix’s total net adds at roughly 33 million for 2020. This is still well above last year’s 28 million net adds, and an impressive YoY increase of about 18%.

Let Us Look At Some More Numbers 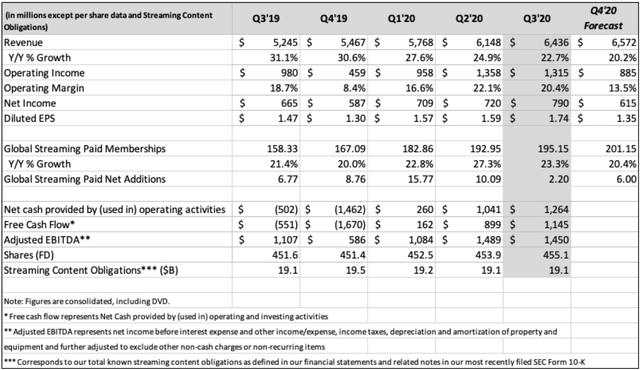 We see that while YoY revenue growth is slowing down from 30+% in late 2019, it is still above 20%. Therefore, we can presume that the company should be able to produce double digit revenue growth (above 10%) for at least another five years. Furthermore, let us keep in mind that the current standard $12.99 plan (rates vary from country to country) is not the limit here. Netflix has gradually raised prices in the past without putting noticeable dents in its subscriber base, and it will very likely continue to do so in the future.

I use Netflix, and if I had to pay $14.99 a month instead of $12.99 per month it would make no material difference to me whatsoever. Some may disagree, but I believe that gradual price increases will continue, and they should enable the company to generate more revenues as well as greater profits down the line.

Let’s Do Some Modeling 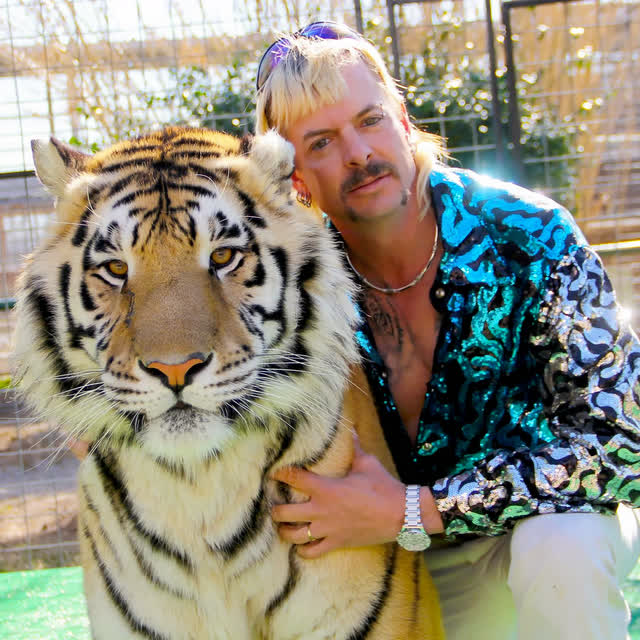 Netflix is expected to have roughly 200 million paid users by the end of this year. Now, growth wise, on a YoY basis this is actually slightly higher than what the company produced last year (20% YoY growth in Q4 2019 vs 20.4% projected growth for Q4 2020). Now, whether the increase in YoY growth is due to COVID-19 is possible, but the company is still likely to produce double digit growth for the next several (at least 5 years or longer) in my view.

Netflix is expected to deliver about $25 billion in revenues this year, and roughly $30 billion in 2021.

Our model implies that Netflix’s revenues are likely to at least double in a 4 year period (2021-2025). We also see that Netflix is becoming more efficient and increasingly profitable.

EPS wise, we see an expected YoY rise of 50% this year, as well as a YoY rise of roughly 42% in 2021. Let us presume that EPS growth continues to decline gradually going forward. Thus, in 2022 we are looking for an increase of about 36%, in 2023 a rise of roughly 32%, in 2024 an increase of about 27%, and in 2020 a rise of about 25%. I believe these estimates are relatively modest, as EPS growth could be higher if Netflix raises its prices going forward.

Nevertheless, using theses underlying projections Netflix should earn roughly $25.13 in 2025. However, I believe these numbers are at the lower spectrum of Netflix’s earnings potential, and if the company delivers around $70 billion in revenues in 2025, EPS could be roughly $27-$30 in my view. Going by recent share count of 455 million, this suggests that Netflix’s net income could be roughly $12.3 – $13.65 billion in 2025. Net income is projected to only be around $2.83 billion this year, and roughly $4 billion in 2021.

Valuing Netflix: Not Your Average Task

Going by Netflix’s current/recent share price of $488 the company is trading at around 78.5 times this year’s EPS estimates, and at roughly 59.4 times next years EPS projections. This may seem high, however, a high growth company like Netflix, with a low global penetration rate (about 4% of the world’s roughly 4.8 billion internet users), that is dominant in its segment should be valued relative to its future earnings potential in my view.

Thus, if we use the mid-range of my 2025 EPS estimate range ($28.50), Netflix is trading at roughly 17 times 2025 EPS estimates. Furthermore, the company will still likely produce double digit revenue and EPS growth at this time. I believe that by this time (2025) Netflix may have a valuation of roughly 35 times EPS, implying a price target of around $1,000 by year end 2025 or sooner (3-5 years).

Now, at $488 a share Netflix doesn’t seem that expensive anymore. Nevertheless, that does not mean that the stock can’t go lower in the short to intermediate term. Therefore, let us look at Netflix’s technical image. 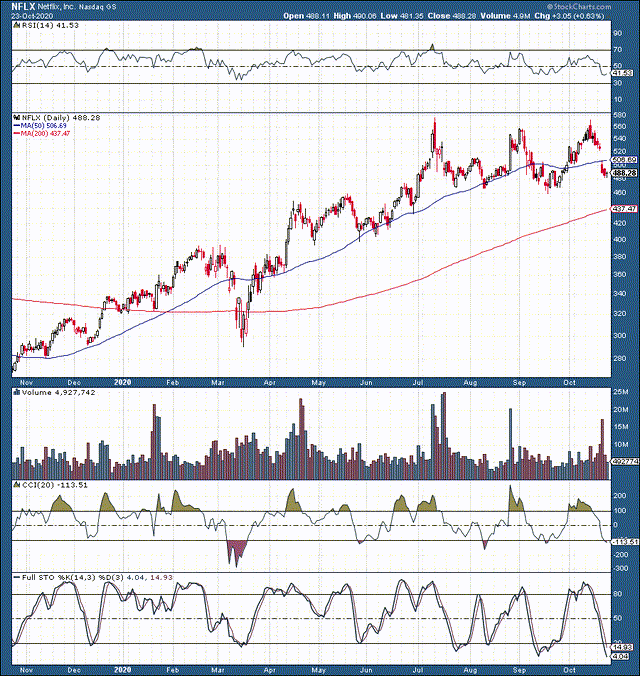 Well, first we see that the stock more than doubled from trough to peak during the last 52 week period. We also see that Netflix made a blowoff top in July, reaching nearly $580. Despite several attempts to break above this level, we noticed that momentum turned more negative during its last attempt in mid-October. This was made apparent by the notably lower RSI than in July, by much lower buy side volume, as well as by other technical factors. This is primarily why we exited the stock on October 14th, right around Netflix’s highs at $554.

However, we have seen a notable correction since then (roughly 15%), and the stock is starting to look more attractive again. Technical indicators like the RSI, CCI, full stochastic and others are beginning to look more constructive here, and there is a major support level at $460. I don’t think Netflix is likely to break through this support point unless a broad market selloff ensues.

Netflix certainly got overbought in the anticipation of more beats due to the stay at home COVID-19 phenomenon. Unfortunately, the company provided a “disappointing” quarter in Q3. However, this is not the end of the world for Netflix. To the contrary, we feel that this is simply a “hangover effect” from a record breaking H1 in 2020. Netflix is a unique, dominant, market leading company in its segment with plenty of subscriber, revenue, net income, and EPS growth potential going forward. Therefore, we are looking to scale back into the stock in the near future and have a base case $1,000 price target for Netflix within the next few (2-5) years.

Want the whole picture? If you would like full articles that include technical analysis, trade triggers, portfolio strategies, options insight, and much more, consider joining Albright Investment Group!

Disclosure: I/we have no positions in any stocks mentioned, but may initiate a long position in NFLX over the next 72 hours. I wrote this article myself, and it expresses my own opinions. I am not receiving compensation for it (other than from Seeking Alpha). I have no business relationship with any company whose stock is mentioned in this article.

Additional disclosure: This article expresses solely my opinions, is produced for informational purposes only and is not a recommendation to buy or sell any securities. Please always conduct your own research before making any investment decisions.

7 Consumer Discretionary Stocks to Buy Ahead of Q3 Earnings