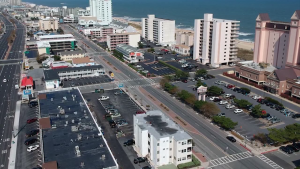 OCEAN CITY, Md.- The owner of The Hobbit Restaurant, Garvey Heiderman, and the founder of Sail Aid International, Sequoia Sun, teamed up Saturday afternoon in Ocean City, to pack up a boat so supplies could be delivered to Haiti.

“We’re just trying to help them have a better life because its an island that’s 6 miles off the coast and they don’t have access to a lot of things,” Sun said.

“It’s something to give back, to do good, to help people, Haiti is the poorest country in the Western Hemisphere, and there’s a lot of people there that have nothing, they have no money, no job,” Sun said.

This is the sailboats second visit to Ocean City to pick up donations from Heiderman, and he said to be a part of this mission is rewarding.

“A lot of us are in situations here where we can have some time in the Fall to give back and it’s the least we can do, I’m in a situation with the restaurant where its very easy for us to get food and get it shipped in bulk so I’m just trying to do my part,” Heiderman said.

Sun said he hopes to make it to Haiti in three weeks, with some other stops along the way.

“I’ve been doing it for 10 years and I hope to continue to do it for another 10, we’ll see how long I last doing it, it’s fulfilling and as long as it works and makes sense we’ll keep doing it,” Sun said.

“Hopefully, we can get more people on board locally or you know across the bridge in Baltimore and DC to start donating supplies,” Heiderman said.