Should You Buy Amazon Stock ahead of the Q3 Earnings?

Amazon along with Apple, Facebook, and Alphabet would release their quarterly earnings on 29 October. What’re analysts projecting for Amazon this quarter and should you buy it before the earnings release? Let’s discuss this.

A third of S&P 500 companies are reporting this week

We’re into the busiest week this earnings season with a third of Dow Jones Industrial Average and S&P 500 companies releasing this week. Four of the FAANG stocks (Facebook, Amazon, Apple, Netflix, and Google-parent Alphabet) are releasing this week. The FAANG earnings started on a dismal note as Netflix reported fewer than expected subscribers in the third quarter.

US tech stocks are priced for perfection after the sharp rise this year and markets have punished stocks on the slightest hint of a growth slowdown. However, they have rewarded stellar growth numbers with a sharp increase in stock prices also.

During their second quarter earnings release, Amazon said that it expects sales to rise between 24% and 33% in the third quarter. Interestingly, while many companies including Apple have refrained from providing quantitative guidance due to the uncertainty, Amazon continues to provide guidance.

Analysts polled by Tikr expect Amazon’s revenues to increase 32% year over year to $92.5 billion. Analysts are forecasting the company’s revenues to rise near the top end of its guidance. Wall Street analysts expect Amazon’s adjusted earnings per share to rise 70% over the corresponding quarter in 2019 to $7.16. 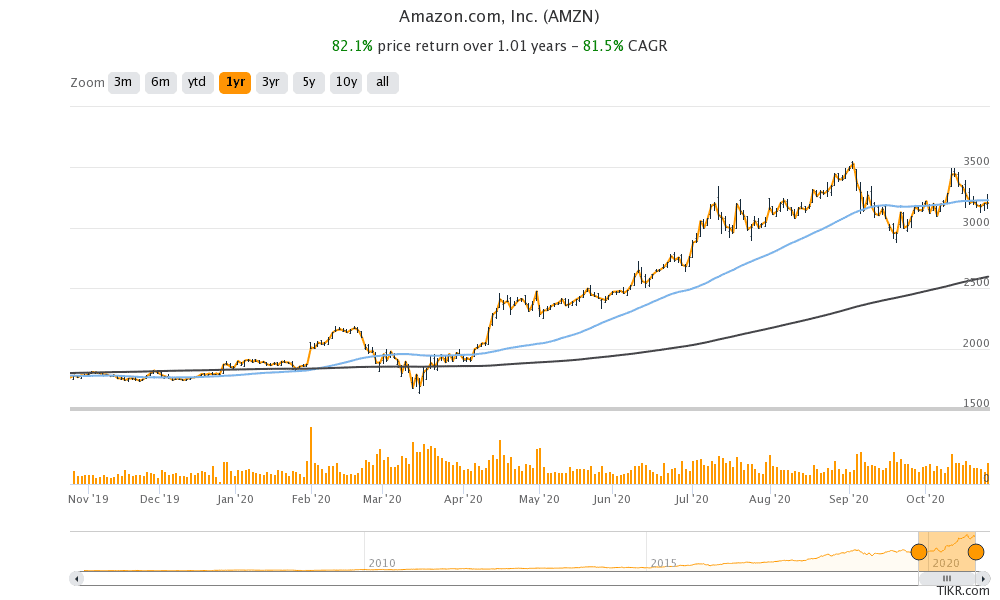 Amazon stock has gained over 73% so far in 2020 and is among the top 15 gainers in the S&P 500. It is also the best performing FAANG stock this year. Alphabet has gained the least among the FAANG stocks this year. While stocks like Amazon and Netflix have rallied this year amid the spike in the so-called “stay-at-home” stocks, lower ad rates have taken a toll on Alphabet.

Is Amazon stock expensive after the spike?

After the rally in Amazon stock this year, it might look expensive to some investors. Amazon trades at an NTM (next-12 months) PE multiple of 91x. However, we should see the high valuation multiple in conjunction with the high growth that the Jeff Bezos-run company is consistently delivering. In a stock market devoid of growth, Amazon gives the scale and growth that many investors are looking for.

Also, some of the recently listed cloud companies have an even higher valuation multiple than Amazon. Amazon Web Services (AWS) is the world’s largest cloud infrastructure platform and has a one third market share in that market.

Of the 49 analysts covering Amazon stock, an overwhelming majority of 46 have rated it as a buy or some equivalent. Three analysts have a hold rating on the stock. Most analysts see any fall in Amazon’s stock price as a buying opportunity.

Amazon stock is currently trading slightly below its 50-day SMA (simple moving average) of 3,228.77 which is a sign of short-term bearishness. If the stock convincingly breaks above the 50-day SMA then the uptrend might continue.

Amazon stock has a 52-week trading range between $1,626.03 and $3,552.25. It is currently trading 9.6% below its 52-week highs. The stock closed slightly in the green yesterday despite the sharp sell-off on Wall Street. It was trading flat in pre markets today while S&P 500 futures point to an opening in the green today after yesterday’s turmoil.

You can buy Amazon stock through any of the reputed online stockbrokers. Alternatively, if you wish to trade derivatives, we also have reviewed a list of derivative brokers you can consider.