The broader markets managed to at least avoid another debacle like yesterday’s, but stocks still struggled Tuesday as bullish catalysts remained scarce.

The U.S. logged a fresh high for seven-day average new COVID-19 cases, continuing worries that coronavirus will drag on the economy further this winter. Meanwhile, hopes for new stimulus continued to fade as negotiators in Washington remained mum.

“We think the ability to get stimulus done is fading each day as we get closer to the U.S. election,” says Charlie Ripley, senior investment strategist for Allianz Investment Management, who adds that we “are reminded that volatility is expected to stay as uncertainties surrounding the path of the virus and the outcome of the election continue to weigh on investors’ minds.”

Also of note was a mega-deal in the semiconductor space: Xilinx (XLNX, +8.6%) agreed to a $35 billion buyout offer from Advanced Micro Devices (AMD, -4.1%). Shareholders in the latter took some profits following a nearly 80% year-to-date return, but analysts still appear upbeat about both the deal and the stock’s longer-term prospects.

“We positively view the announced acquisition of Xilinx this morning, as it brings together complementary product offerings and increases its addressable market. We see significant share gain on the horizon within its server business, with considerable interest for its next-generation Milan server processors set to begin volume shipments in early ’21,” writes CFRA Research’s Angelo Zino, who rates AMD shares at Buy and upgraded his 12-month price target from $90 per share to $100.

Other action in the stock market today: 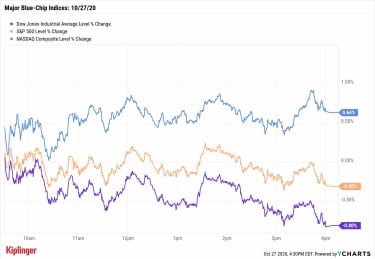 Check out more earnings previews and estimates at our weekly earnings calendar.

Are You Excited About Tomorrow? Should You Be?

Tomorrow is the best day of the year … statistically speaking.

Since 1950, the S&P 500 has enjoyed average daily returns of 0.54% on Oct. 28, making it the stock market’s most fruitful day. That’s according to LPL Financial Chief Market Strategist Ryan Detrick, who quips, “Maybe because it is my birthday, or perhaps it is simply random.”

Here’s a more in-depth look, via LPL’s Chart of the Day: 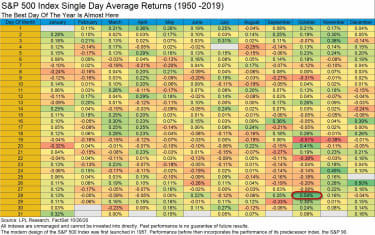 Presidential elections are something of a mixed bag for the broader stock market, but presidential policies can mean a great deal to certain industries, which has played out recently as so-called Biden stocks have outperformed Trump stocks as the former has maintained a wide lead in many national polls. So we’ve recently re-examined and added a few additional ideas to our presidential picks — you can check out 13 stocks that could surge during a Joe Biden presidency, and 13 plays for another four years of President Donald Trump.

Regardless of the result, Trump has at least two more months to cement (or change) his position on the Mount Rushmore of market-friendly leaders: our list of the best and worst presidents by stock-market returns.