Fear and loathing stalk the halls of the energy corridors. The peasants are storming the battlements, torches and pitchforks in hand… that’s probably enough metaphors before breakfast. Is the ‘oil bidness’ really as bad as all that?

Not hardly, but you can’t tell it by the valuations of energy stocks currently. Unless you buy into the argument that oil demand is just going to shrivel up and we’re going to go completely green in the next month or two, you should view these depressed prices as buying opportunities that will not last. Suncor Energy (SU) is a shining example of an advantaged energy producer selling at an extreme discount to valuation. Currently trading at ~$27K per flowing barrel, trends in the industry now extant could create an updraft back toward the middle $30s or even $40 PFB. As recently as Q4 2019, it was trading at $44K per flowing barrel.

We think tailwinds for Canadian heavy oil will boost prices and will benefit SU accordingly. It is also paying a nice, well-covered dividend if price appreciation takes a while.

One of the things we had been waiting on is air traffic. We had gasoline demand, less than before, but well off March lows. We had diesel roaring down the road as the big delivery companies filled up their trucks delivering Amazon (AMZN) packages to suburbia. What we didn’t have is air traffic. More specifically, passenger air traffic. Now we do. Some anyway.

TSA screened almost a million passengers last Sunday. The most since April 14th, and what’s better, this is the 5th day in October where this figure has been hit. No need to do backflips, we’re still down 50% from a year earlier, but if people are flying, planes are going to be gassed up. And, that’s good for WTI.

Business travel is what’s lagging, and it should come back as well, although this will be a slower climb than leisure travel.

The need for heavy crude

About a year and a half ago, I penned an article that in retrospect seems prescient. It discussed the nature of crude oil origin and why light gravity shale oil couldn’t feed our hungry refineries. Refineries that were built 30-40 years ago when the prevailing mantra was “We’re running out of oil and we must import what we need.” How dated that notion seems now when the world is swimming in oil.

It was titled, “Crude Quality Will Matter At Some Point.” I’ve set it to free so give it a read for more information.

Now at least two of our key suppliers for this heavy oil our refineries must have to run efficiently are either withdrawing their crude from export or are on a sanctions list that prevents refineries from using it. In one case, Mexico has built a new refinery to process their heavy oil and according to a report, will restrict shipments of up to 70% of this crude for the next several years. Poor, sad Venezuela’s heavy crude is off limits for the foreseeable future due to U.S. sanctions.

These facts set the stage for our other key supplier of this needed substance – Canada – to prosper in the coming months. This is something we have been discussing at length in the Daily Drilling Report for sometime, and featuring strong Canadian producer names as being likely to benefit as shale supplies tailed off from lack of drilling in U.S shale plays.

Western Canada Select (WCS) has historically traded at a substantial discount to West Texas Intermediate (WTI) for a variety of reasons, shipping distance to markets being key among them. Now thanks to demand for this low gravity oil being on the rise, this differential is projected to substantially narrow and this should provide a serious tailwind to a key Canadian producer, Suncor Energy Inc. (SU).

It gets better for WCS. As the linked article notes, that could be a competition developing for heavy oil coming from Canada.

U.S. Gulf Coast demand will create tension with Midwest refiners. “Chicago refiners have limited access to alternative sources of heavy oil and will bid heavy oil away from the Gulf Coast market to ensure they have enough supply,” the bank said. “We believe that this could translate to stronger prices for WCS or a tighter spread between WTI and WCS.

Now let’s have a look at Suncor.

Note – most of this article appeared in the Daily Drilling Report last week.

The Case for Suncor

Suncor is one of Canada’s largest integrated, independent oil and gas companies. It is a solid name in this business with diversified operations, real earnings, no debt bomb, a nice dividend, and is currently trading just above March lows. As the tongue-in-cheek lines I opened this piece with indicate, Suncor and many great names are trading like the four horsemen of the apocalypse…oops, there I go again. To finish the thought, trading like there was just never going to be a tomorrow in this business.

None of this is true and savvy; risk-tolerant investors should look at companies like SU as discounted diamonds to be scooped up at fire-sale prices currently prevailing. SU hits all the buttons, E&P, Refining, and Retail. A proven model for energy majors, although one can question the E&P aspect of that given the last six years.

A couple of key points

Integrated is a key term here and worth a brief comment. What it means is there is an up and downstream side to the company. One side pulls it out of the ground and the other fractions it into useful products. If you take a close look at the graphic below you will see SU has a number of refineries in Canada and the U.S. Here’s a pop quiz. When is the last time anyone built a refinery in either country?

If you said 1977 for the U.S. and 2017 for Canada, you would be correct. The one in Canada filled a nearly 30-year void in new refinery construction. There are a couple reasons to point this out. First, a lot of time when margins on crude are in the tank, refining margins shine. It’s not always the case, there’s a lot of variables. Second, and circling back to the point about refineries, is these are difficult if not impossible assets to build these days. Thank the environmental agencies and green movement, which argues against any new oil and gas infrastructure investments, for that. 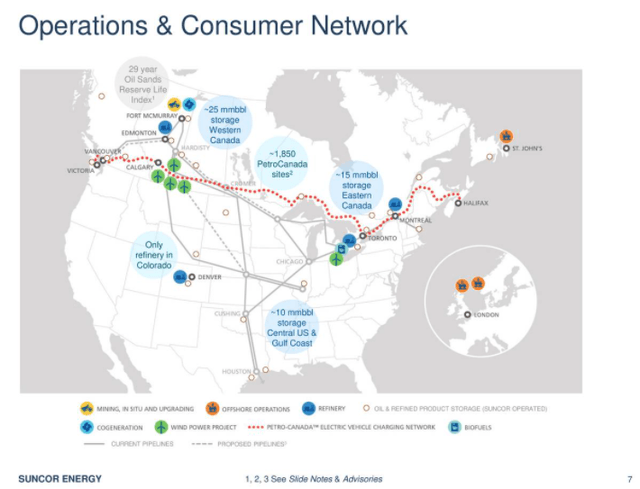 I have my consciousness raised about Canadian companies like Suncor. My head was stuck around the massive capex it takes to produce oil from what essentially amounts to mining for it. But, once the considerable infrastructure is in place, the costs go down per unit. The more units the more unit cost goes down over time.

Let’s hear it for long life, low decline assets. I don’t suppose any petroleum-based asset fits this description more than oil sands. Shale production numbs us to an endless cycle of capex for drilling and fracking to stay ahead of the decline rate. We have shown in the last couple of years that it can be made to work, but it has made our domestic industry fairly frothy with a steep crash earlier this year. Not so with oil sand mining. As in the picture above, mining once the big stuff is in place has a lot of cost advantages compared to other resources. 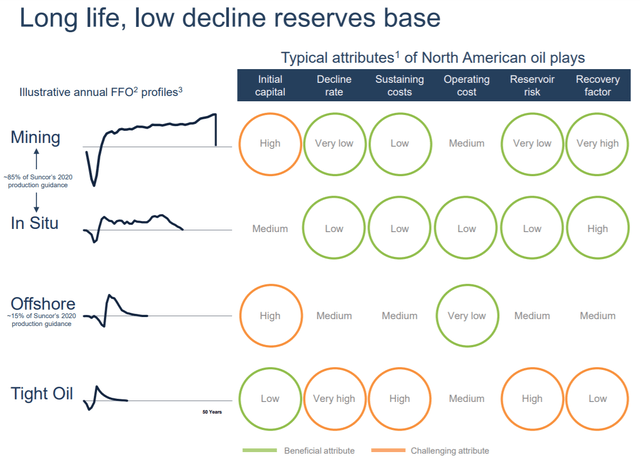 The company has ample financial resources to meet any of its obligations. SU generated ~$10 bn in FFO in 2019 and covers opex, sustaining capex and the dividend at $35 WTI. As of Q2, is generating free cash on a run rate of $2.2 bn annually. Expectations are for SU to be able to meet debt maturities under these conditions without further borrowing. 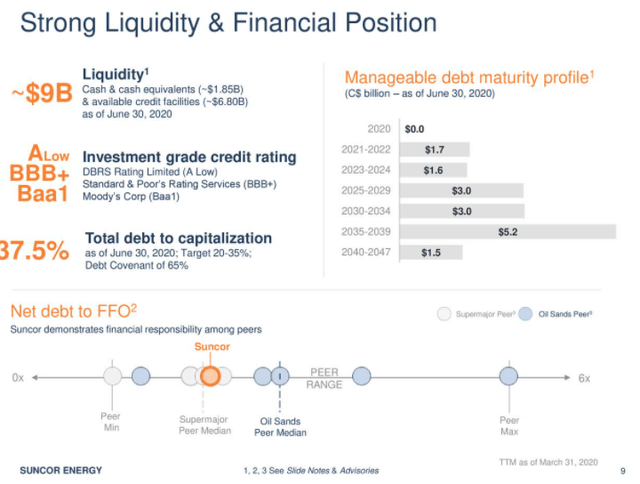 The company with over $1 billion in cost reductions targeted was able to reduce 2020 breakeven by 30% to $35 bbl. Alister Cowan, Suncor CFO, comments-

At the end of March, we announced a $1 billion reduction to our operating costs in 2020 compared to 2019. And during the quarter, we made progress towards achieving this target, with our absolute cost, $811 million lower than Q1 this year and $643 million lower than Q2 last year. We remain confident in the agility of our business and our people to deliver the $1 billion of operating cost savings in 2020 relative to 2019. 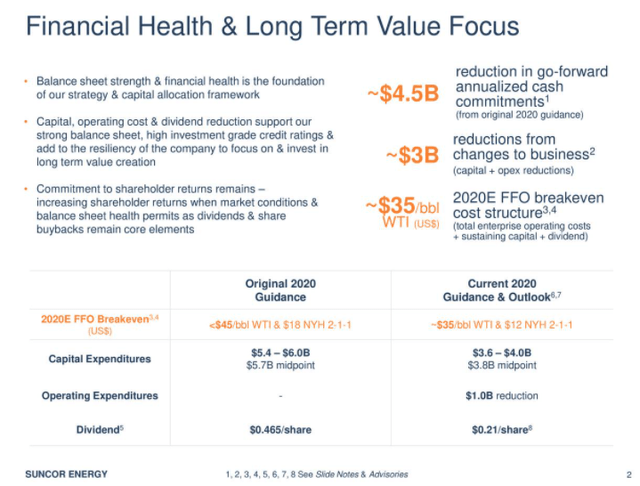 Low costs, sustainable production with more than 30 years of reserves at current production rate, and a heavy oil resource that is much in demand by Gulf Coast refineries make for an enticing picture. Add the fact its currently 8.5% yielding dividend is well covered by cash flow, and it only gets sweeter.

U.S. investors should note Canada taxes dividends at 15%. Depending on your financial circumstances you may be able to reclaim this on your U.S. taxes. Please follow the link here for more information and be sure to consult your tax advisor for information pertaining to your situation.

I urge you to look past the depressed state of energy names right now. Would you rather have bought SU at $35 in February? Of course not, you would have lost 2/3 of your capital. As I’ve discussed, there is a fire sale going on in energy names at present for a variety of reasons. None of these detract from the fact that companies like SU are going to be delivering needed oil and gas far into the future.

We should also note the current consolidation taking place in the Permian basin. This has been long anticipated – post OXY and Anadarko. Conoco (COP) is merging with Concho Resources (CXO), and last night Pioneer (PXD) and Parsley (PE) announced a cashless merger that will concentrate value in this play. Investors should be winners here as costs are further spread over larger production volumes, driving unit breakeven costs down.

The point is these types of transactions take place at or near bottoms in cyclic industries, giving some confidence that an entry point here in SU is unlikely to deteriorate in value. And, could appreciate significantly in a scenario where Canadian names begin to consolidate the way Permian companies are. 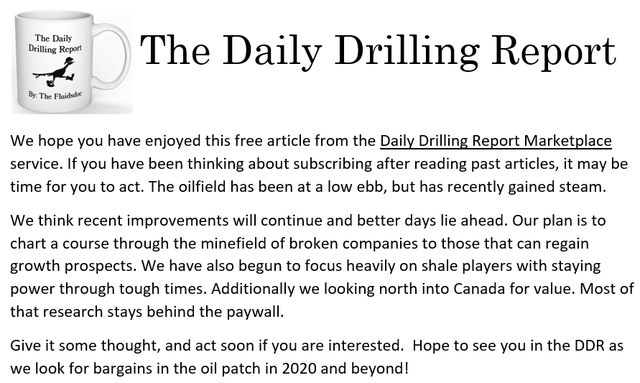 Disclosure: I/we have no positions in any stocks mentioned, but may initiate a long position in SU over the next 72 hours. I wrote this article myself, and it expresses my own opinions. I am not receiving compensation for it (other than from Seeking Alpha). I have no business relationship with any company whose stock is mentioned in this article.

Additional disclosure: This is not advice to buy or sell this stock or ETF. I am not an accountant or CPA or CFA. This article is intended to provide information to interested parties and is in no way a recommendation to buy or sell the securities mentioned. As I have no knowledge of individual investor circumstances, goals, and/or portfolio concentration or diversification, readers are expected to do their own due diligence before investing their hard-earned cash.

Evaluating Microsoft and Apple Stock Ahead of Earnings