closed out the Second Decade of the 21st Century this past 31 December at the price of $1902, after which we penned our missive “”.

Gold opened the Third Decade of the 21st Century this past Monday at the price of 1908, after which—(with a little cachet we’d like to think from our call for 2401)—come Wednesday price had leapt up to 1962.

From there, extrapolating such robust rate of ascent (+3.2% every three days), would’ve found Gold reaching our 2401 target on 04 February. “Cachet, baby!”

But in truth: “Correction, baby!”

As a valued veteran trading colleague of ours has quipped over many-a-decade: “All gaps get filled.” And for Gold it did indeed and then some, as price Friday alone cascaded -3.4% to settle at 1850 in commencing the new decade on the wrong weekly foot, its net loss being -52 points. (Fortunately there remain 51 weeks in 2021 to achieve our Gold target of 2401).

But for the financial world at large, everything obviously is great. After all, the is at an all-time high. (Wanna know its “live” P/E? Wait for it…) The value of money (as has become the value of stock market earnings) is clearly deemed to be irrelevant. Fully-foundationless bits**t has now reached $40,000 (a seasoned Wall Street analyst noting that one day there actually shall be an established, accepted “cryptocurrency” but that it shan’t be bits**t).

Too, the four-wheel battery company Tesla (NASDAQ:) (with its price/earnings ratio now 1,554.3x) ranks fourth by market capitalization in the S&P. Moreover, remember some years back when by moneyflow the S&P was “Nuthin’ but Apple (NASDAQ:)”? Today ’tis “Nuthin’ but Tesla”. Write this down: 91% (“ninety-one percent”) of the capitalization-weighted net change in the S&P 500’s moneyflow from this past Monday through Friday was Tesla’s share alone. Think about this: what if the newly-empowered StateSide “Green Squad” moves to eliminate batteries from the planet… “And the new Boeing (NYSE:) 7×7 shall solely fly on solar power…”

Meanwhile good old Gold—an actual tangible currency—priced today at 1850 is but 51% of its supply-adjusted, Dollar-debased value of 3625 as we update weekly in the above Gold Scoreboard.

Squire! Grand of you to pop back. Let us guess: clearing snow in the Apennines? “Actually, rescuing stranded snow-removal equipment in the Dolomites, mmb…” (Why after all these years do we even ask…)

But our good colleague’s point is valid: nothing has changed. Gold remains reluctant to really get roaring even in the face of ultimately disastrous currency debasement, whilst S&P 500 earnings have become even less supportive of the rising Index, its “live” P/E at this writing (here it is) 83.5x ahead of Q4 Earnings Season commencing in the new week. Again, don’t argue: do the math yourself.

With time at a premium for us this weekend, let’s swiftly move through our key graphics, beginning with Gold’s weekly bars from one year ago-to-date. And therein (dare we say at “long” last) the parabolic trend has finally flipped to Long following a 19-week stint as Short. The rightmost fresh blue dot is there, but Gold’s end-of-week fold makes for a rather inauspicious start to it all: 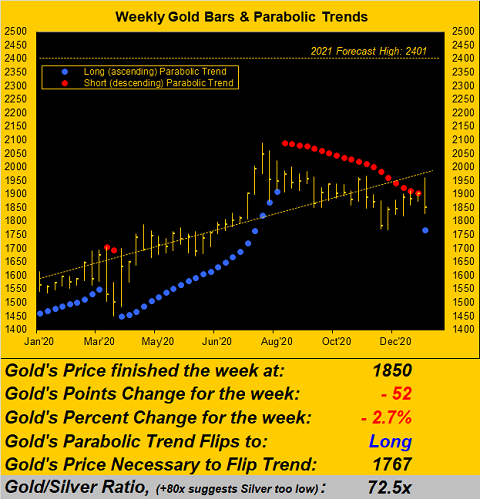 Then here across nearly ten years we’ve Gold’s daily closes vis-a-vis its 300-day moving average. As you regular readers know, that average (being 111 points below present price) is the only technical negative for which we voiced some concern. ‘Course, this is more than mitigated fundamentally by price being (as noted) 51% below our Scoreboard valuation level of 3625. Note the the upper line on the chart as our forecast 2401 high for this year:

As for the Economic Barometer, ’tis now in complete opposition to the S&P 500, which again at such extreme valuation that as written a week ago: “is horribly due for a massive crash”, (we ought think led by Tesla as a falling battery can be devastating to all in its path). Of economic note this past week, November’s reached its widest gap in 14 years, whilst the month’s and slowed. And as for December, was instead job deprivation. Here’s the Baro with the S&P (red line):

But not to worry, for fortunately new Federal Open Market Committee voting member Charles “ChiFedPres” Evans looks for monetary policy to stay accommodative (and we quote) “for a long time.” That’s nice. Is everyone watching the on the U.S. Treasury Bond as it approaches 2%? Currently at 1.863%, that compares with the S&P 500’s yield of just 1.465%. “Got risk?”

To be sure, the precious metals suffered some risk after first starting out the week/year/decade to the upside. In the following two-panel graphic we’ve Gold’s daily bars from three months ago-to-date on the left and 10-day Market Profile on the right. Hardly the prettiest picture, but remember: the weekly parabolic trend has now flipped to Long. Bring on the bargain hunters (please): 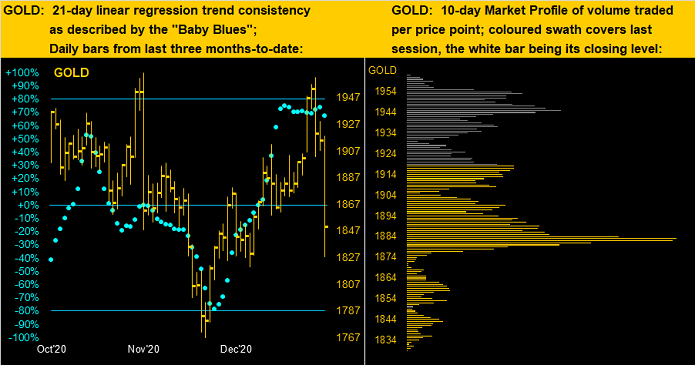 As for dear ole Sister , ’tis quite the similar picture. At least in her and Gold’s case, Friday’s closes were well off session lows: 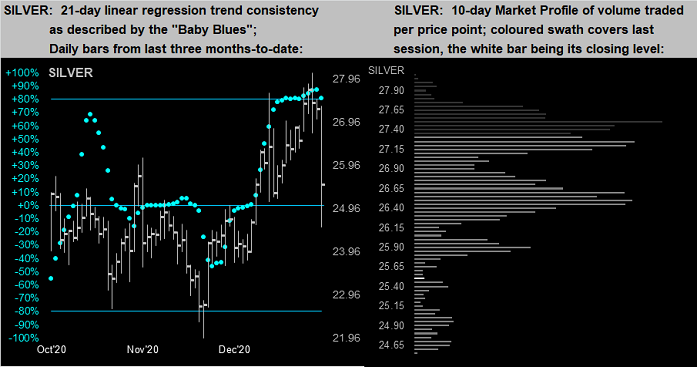 So there it all is ahead of a week with 15 incoming metrics scheduled for the Econ Baro. We’re underway in 2021, and you know the long-standing saying: “As goes January…” Perhaps ’twill be the case for the Econ Baro as Bidenomics shan’t help. But we believe hardly for the rising S&P. In fact, let’s see if Gold along the year’s route to 2401 passes above the level of a inevitably declining S&P!

As Texas legislators consider expanding Medicaid, they should also consider the supply of care

Biden’s defense plan and some stocks set to benefit