The Stock Market Phenomenon That’s Turned the Nasdaq Upside Down

The Nasdaq Composite (NASDAQINDEX:^IXIC) managed to finish the week on a positive note on Friday. The index rose almost 0.4%, which was roughly in line with the gains for the S&P 500. That still left it down more than 1% for the week.

The Nasdaq has gotten a lot of attention lately because of its dramatic outperformance compared to other stock markets. It would be natural to think that much of the returns are stemming from the many innovative small upstarts that have seen so much success lately. But a closer look at the source of the returns shows that something unusual is happening — and it speaks to the peculiar characteristics of today’s stock market environment. 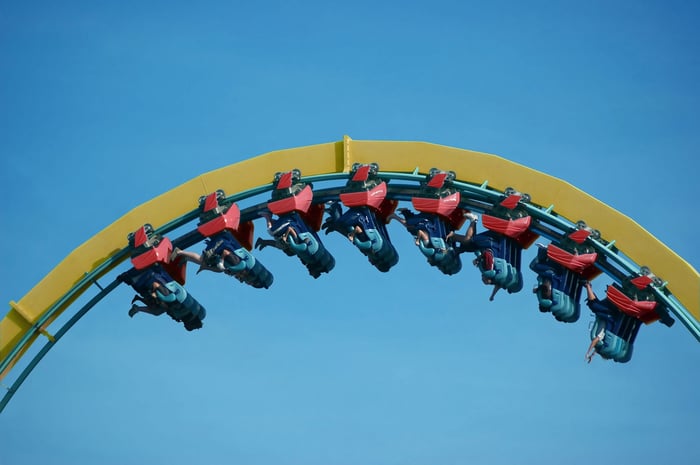 Nasdaq investors are quite familiar with the Invesco QQQ ETF (NASDAQ:QQQ). This exchange-traded fund is an index ETF designed to track the Nasdaq-100 Index, which consists of the top 100 nonfinancial stocks whose shares trade on Nasdaq.

The QQQ ETF is weighted by market capitalization. That means that the biggest companies in the index get larger weightings than the smallest companies — far greater, given the wide disparity in size among the 100 or so stocks that are included in the index.

But there’s another way to invest in the stocks in the Nasdaq-100 Index. A different ETF called the Direxion Nasdaq-100 Equal Weighted ETF (NYSEMKT:QQQE) includes the exact same lineup of companies in its portfolio. However, as its name suggests, it owns equal amounts of all of those stocks, rather than weighting each holding by market capitalization. The ETF periodically rebalances its portfolio to account for individual stocks performing differently over time.

When you think about it, that makes sense. Market-cap weighted portfolios have more of their money invested in big companies that typically don’t have as much growth potential. Smaller-cap stocks traditionally outperform larger-cap stocks, and so because the equal weighted ETF has more of its money in those smaller stocks, it makes sense that it would outperform the market-cap weighted ETF.

However, that’s not the case with the Nasdaq. As you can see below, the market-cap weighted QQQ has easily beaten the equal-weighted Direxion ETF since 2012. 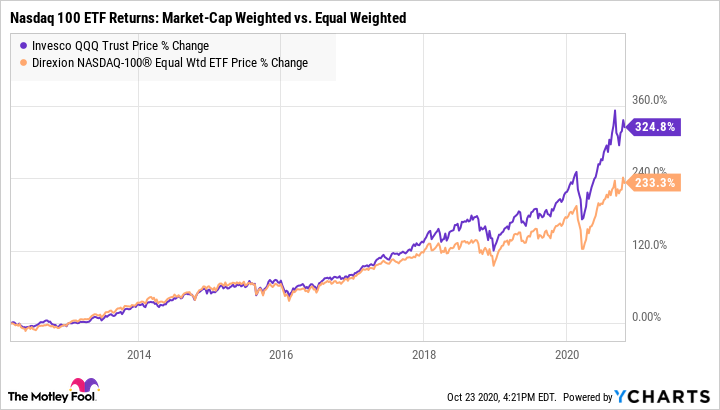 The difference has been especially pronounced recently. Over the past year, the market-cap weighted fund has beaten the equal weighted fund 48% to 33%. Similar gaps persist when you look back three years or even five years.

A look at the companies involved shows this unusual phenomenon. The biggest companies in the Nasdaq — stocks like Apple, Amazon, and Microsoft — have all performed exceptionally well in recent years. They’ve defied the law of large numbers, quickly progressing from initially jumping over the $1 trillion mark in market capitalization to challenge and surpass $2 trillion.

That’s not to say that the equal weighted Nasdaq ETF won’t at some point reverse its underperformance and start to do better. But as long as those top tech giants are among the most promising companies in the Nasdaq, then their smaller-cap peers in the stock market will face a challenge to try to catch up.

AMD Gets Mixed Review From Deutsche Bank Before Earnings

AMD Gets Mixed Review From Deutsche Bank Before Earnings