Netflix (NASDAQ:NFLX) has been setting records since its inception. This by definition makes Netflix stock a buy on this or any dip for that matter. This is only true because nothing has changed in its thesis and inside a bull market.

The stock fell due to lofty expectations and investors are throwing a hissy-fit. They are still the leader and everyone else is playing catch-up. Even when they do, there is plenty of room for all of them to prosper for decades to come.

We all know the story, that the lock-down caused an infusion of new users into everything that is online. Naturally, Wall Street expected a blow out new signup stat and that didn’t happen. What didn’t help was the monster blowout that Snap Inc (NYSE:SNAP) just delivered. Investors are now spoiled that way.

The pandemic, while a human tragedy, was the strongest push forward for the digitization trend. For decades we’ve been migrating everything online but there were stragglers. The quarantine forced everyone to get digital immediately. Suddenly everyone got on board so now it is exponential.

Netflix Stock Has Room to Grow

Streaming media is one of those things that goes well with that. Besides, when no one is working, then there are billions more hours available to stream. The average streaming per user more than doubled since last year.

Moreover, Netflix added 15.8 million users to boot into the quarantine. These are astronomical numbers and they are a fast-forward peek at what’s to come. It is not a top not by a long shot. The U.S. market may be saturated, but overseas, Netflix has just over 100 million users. In a world with seven billion people that is a lot of potential still.

The fact remains that streaming content is a sustainable bullish thesis and NFLX created the trend. It now has many worthy competitors like Disney (NYSE:DIS), Amazon (NASDAQ:AMZN) and Apple (NASDAQ:AAPL), to name three.

These are beasts but Netflix still has the first mover advantage. Besides, only Disney has can really compete on content so far. The other two are not spending enough on that to make a big dent in Netflix’s success.

Where Things Went Wrong and Where Is Support 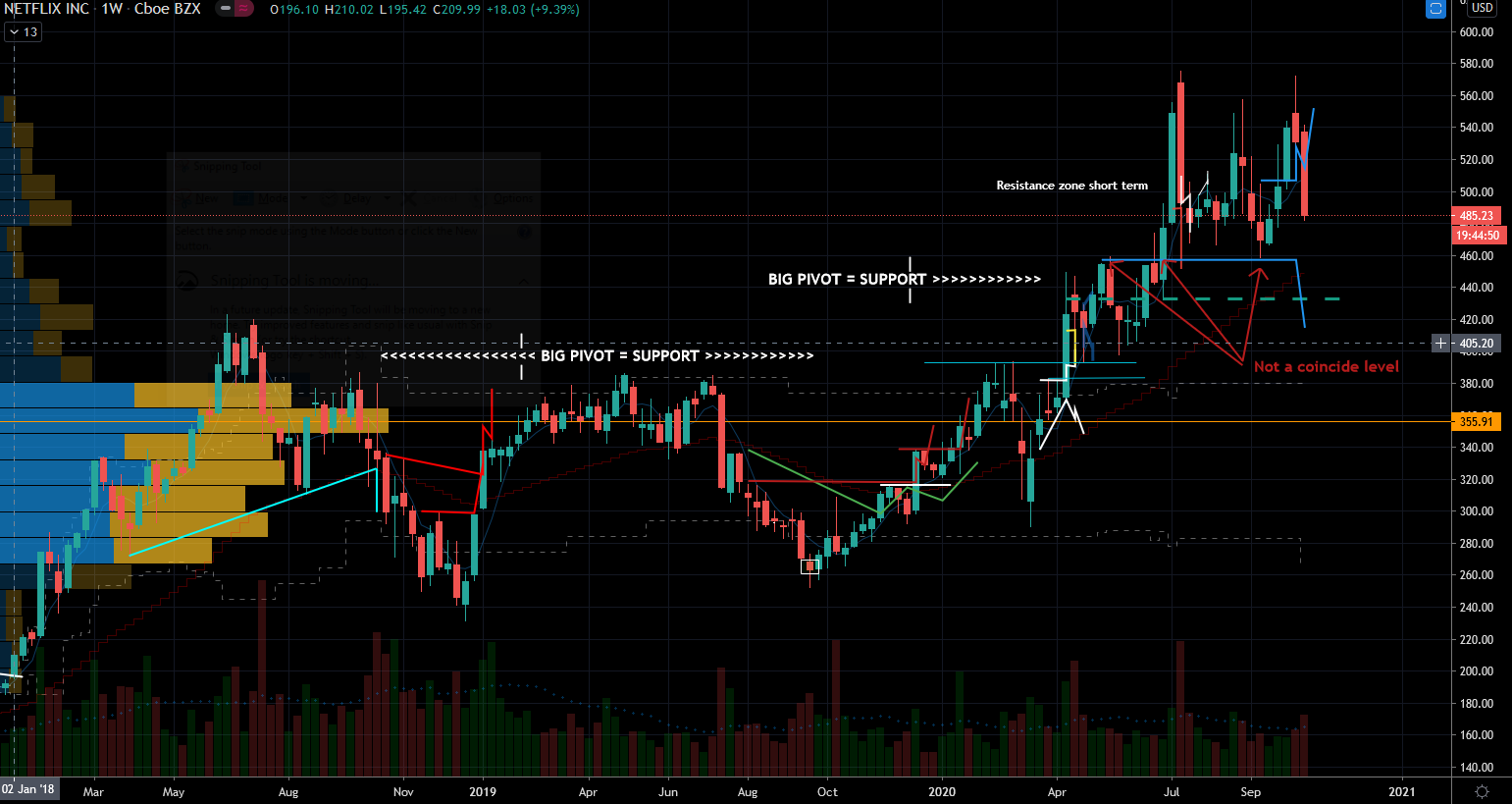 The disappointment this week came from the miss on user metrics. The financials have never been great because the bullish thesis is for the global subscriber growth. This doesn’t come cheap so they need to use over-spending as part of the strategy.

Missing sales or earnings is bad, but in this case they are forgivable. Missing the new signups on the other hand causes corrections. Give the investors some space to finish this temper tantrum and Netflix stock will resume higher.

They don’t ring bells at tops or bottoms so I don’t aim to catch the perfect dip. Pivot zones are important on charts and $450 is the biggest one in play here. This was the heaviest level of contention since April.

Then in June the bulls prevailed and broke out from it to new highs. Netflix stock rallied 25% but then gave it back up quickly. They repeated the process two more times. The last swing higher ended on Oct. 14 and the stock is now 16% lower.

This is almost a full recession in Wall Street terms. When a stock falls back into a pivot zone it finds buyers. In this case it’s a zone within $10 of $450 per share. I bet it holds this time and even if it fails there is another similar support band $50 lower.

Earlier I didn’t give Netflix stock enough credit on its fundamentals. It has a reasonable 79x price-to-earnings ratio for a growth company. Also the stock price is not bloated since price-to-sales is under 10x. This is inline with most of the mega-tech stocks so it is in good company. Apple’s P/E is under 40x but it doesn’t grow, and even its P/S is a tad below Netflix.

Don’t get me wrong, I am not diluted into thinking that Netflix stock is cheap. My point is that valuation is not a reason to short it on this dip. The upside potential continues to be bigger than the downside risk. Because of extrinsic risks looming it’s best to leave room to add on more dips. If I like it here, then I would like it even more at $400.

In the long run, companies like this are rare. It would be too early to call its demise just because of one disappointing metric. Much like they were with Amazon, the Netflix stock perma-bears are wrong to expect sustained selling.

On the date of publication, Nicolas Chahine did not have (either directly or indirectly) any positions in the securities mentioned in this article.

Nicolas Chahine is the managing director of SellSpreads.com.