TOKYO — Japan’s stock market is heading toward a repeat performance from last spring as the country prepares for another COVID-triggered state of emergency, the declaration for which is expected to come on Thursday, nine months to the day since the central government issued its initial “soft lockdown.”

Investors have spent the week rushing to sell stocks in sectors like transportation, retail, food and beverages, all likely to be negatively impacted by the state of emergency, which is initially expected to last a month, covering Tokyo and its neighboring prefectures of Chiba, Kanagawa, and Saitama.

As the declaration approaches, restaurant operators have fallen out of investor favor. So far this year, shares in Create Restaurants Holdings, operator of more than 1,000 eateries, have lost over 8%. Elsewhere in the sector, shares in Colowide have dropped 7.5%, while Kura Sushi’s stock has slid 6.1%.

The Tokyo Stock Exchange opened this year’s trading on Monday, two days after Tokyo area governors asked the central government to declare a state of emergency.

Those governors are also urging residents not to go out after 8 p.m., and asking bars and restaurants to close at that time.

“Comparable store sales for the restaurant industry will drop around 20% in January,” predicts Ryozo Minagawa, a senior analyst at SMBC Nikko Securities in Tokyo, due to the curfew affecting not only bars but various types of food and beverage chains. The looming state of emergency has prompted investors to also dump transportation stocks like Odakyu Electric Railway and Keisei Electric Railway, both of which operate mainly in areas that will be covered by the declaration. Their shares have each plunged 6% in the opening trading days of the year.

Unlike the state of emergency that began on April 7, the Japanese government this time will not ask schools, hotels, movie theaters and other spaces to close.

However, investors have been quick to act, with shares in department store management company Isetan Mitsukoshi Holdings falling more than 6% and those in Tokyu Corp., a big conglomerate with railways, bus lines and hotels under its umbrella, dropping 5.8%.

Shares in Seibu Holdings, which runs railways and hotels, have declined over 7%, with investors worrying that the emergency and requests for people to stay indoors will cripple businesses that cater to consumers on the go.

Ryutaro Kono, chief Japan economist at BNP Paribas in Tokyo, wrote in a report that “there is a high possibility the coronavirus emergency will be extended.”

The first soft lockdown originally covered Tokyo and six other prefectures but later expanded nationwide. In addition, it was extended roughly one month from the initial plan, triggering a major economic contraction before it was lifted on May 25.

When the declaration was announced, investors reacted as many are today. Land and air transportation stocks began to decline. They remained lackluster well into May, when anticipation that the COVID emergency was drawing to a close propped them up.

Takahide Kiuchi, executive economist at the Nomura Research Institute and a former member of the Bank of Japan’s policy board, estimates that a monthlong state of emergency will lead to the disappearance of 4.89 trillion yen ($47 billion) in domestic consumption as “unnecessary and non-urgent consumption will be suppressed.” Kiuchi says this will push down Japan’s annual gross domestic product by 0.88%.

Along with the emergency, Japan is preparing to suspend new entries of foreign nationals under business travel agreements with 11 countries and regions, including China and South Korea. Shares in ANA Holdings and Japan Airlines have thus declined so far this year.

All this is coming after Japan’s Nikkei Stock Average climbed to a 30-year high at the end of 2020. But now the benchmark’s heady performance in the final months of last year, as well as the pandemic’s spread in Japan, Europe and the U.S., has led to less risk-taking. Investors buying on dips have kept the Nikkei index from taking a heavy fall. 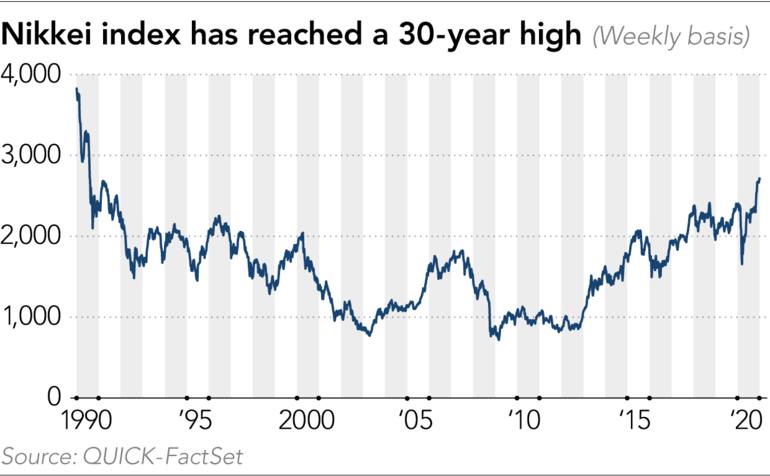 Tech companies are attracting investors. Medical Data Vision’s stock price has surged nearly 6% this week, and shares in cloud service provider GMO GlobalSign Holdings have also gained 6%. Also on the rise are stocks of companies in the semiconductor supply chain as well as those likely to benefit as consumers are forced to conduct their lives from their homes, such as eBook distributor Media Do.

Masahiro Ichikawa, chief market strategist at Mitsui Sumitomo DS Asset Management in Tokyo, notes that “once COVID-19 vaccines are rolled out, the market will likely gain its momentum back.”

Prime Minister Yoshihide Suga has announced that Pfizer’s coronavirus vaccine will become available in the country by late February.

Ichikawa concluded, “Investors will stay away from restaurant businesses and transport stocks at least until the emergency ends.”

Clorox Disinfecting Wipes Are Back in Stock on Amazon Now

Clorox Disinfecting Wipes Are Back in Stock on Amazon Now