Walmart Stock – Why Beyond Meat Shares Are Not for Everyone

Walmart Stock – Why Beyond Meat Shares Are Not for Everyone

Beyond Meat (BYND) is trading a rough $5 or 3.7% higher as markets approached the opening bell. It’s been quite a year so far for the purveyor of plant based meat-like products. The stock closed on Tuesday night at $133.95, up a cool 7% year to date, though that last sale seems far less cool when it dawns on one that BYND also stands 39.4% below it’s late February high just six weeks ago.

It’s been the year of the deal. Beyond Meat has made groundbreaking deals with PepsiCo (PEP) to work together in order to provide plant based proteins for PepsiCo’s line-up of beverages and snacks. Then there is the three year global strategic agreement to supply McDonald’s (MCD) with the McPlant burger, as well as an announced partnership with Yum Brands (YUM) to create innovative plant based menu items for the KFC, Taco Bell, and Pizza Hut chains. Did I mention getting Beyond Meat products on grocery aisle shelves in Walmart (WMT) ? Oh, and speaking of deals, the firm raised a rough $980 million in 0% convertible senior notes that were brought to market in early March.

Though the deal making has been active, it is not like there have not been issues for management to work through. Q4 earnings were tough to look at. Significant misses across the board for (still a long way from profitable) earnings per share, revenue growth that for a third consecutive quarter not only disappointed but printed in the low single digits percentage-wise, and an absolutely tragic miss on gross margin.

In addition, competitor Impossible Foods cut prices in February in order to make its products compete better with actual meat for the budget conscious consumer. Last week, Oppenheimer analyst Rupesh Parikh who maintained a “Hold” on the stock, acknowledged the rising competition that Impossible Foods is bringing to this market, and the likelihood that Beyond Meat will face increased price pressure as well as margin compression moving forward.

Then came Wednesday, April 7th. Beyond Meat had announced the opening of a new facility in Jiaxing near Shanghai where the firm can manufacture its products abroad in order to better serve Asian markets. There is believed to be significantly increasing Chinese demand for plant based faux pork, beef, and poultry. Beyond Meat is expected to open a second non-U.S. manufacturing facility in Europe at some point later this year.

By the way, BYND was now well off of this morning’s highs but still up for the day, trading close to $135. Earnings are due in early May. The street is broadly looking for EPS of $-0.21 on revenue of $113 million. That revenue number would be good for year over year growth of 16.4%, and that would be a welcome acceleration from where the firm had been for much of the pandemic. 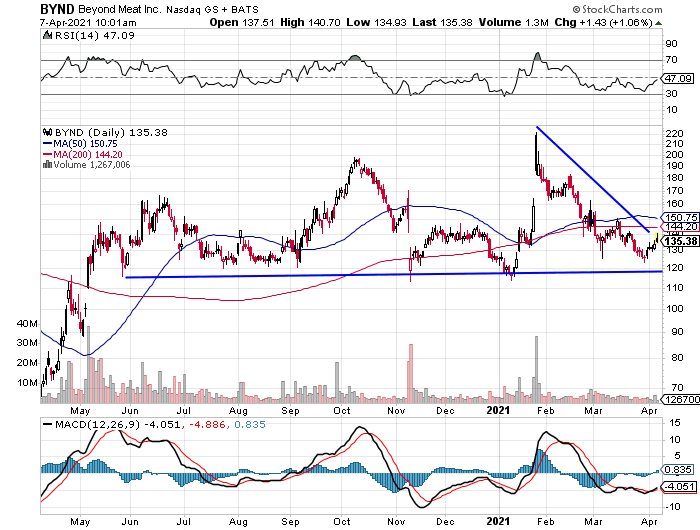 As readers will see, the shares have largely gone sideways for more than a year, but with wild spikes to the upside that seem to usually fade. Looks like if $125 support fails, that good support does show up at $115. The daily MACD is in lousy shape, while Relative Strength, though recovering remains weak. All that said, since late February, the stock has seen nothing but lower highs that run down to a baseline. This set-up often leads to an explosive move, but in which direction? That’s hard to day.

Of course the products have to become price competitive. That said, demand is undeniable. McDonald’s, Yum Brands, PepsiCo, and Walmart are huge, but China? That’s really, really huge. I can not say just go buy a stock with an operating margin that would frighten a vampire (-20%), but the firm is not overwhelmed with debt. Net cash position is down but not net assets. Both current and quick ratios are reflective of a firm that will have no problem meeting obligations anytime soon.

My opinion is that this stock is ideal for an investor looking to add some speculation to a portfolio lacking such a product. Nothing wrong with adding incrementally down to $125, but then the investor would either have to run for cover or seek out protection.

(Walmart is a holding in Jim Cramer’s Action Alerts PLUS member club. Want to be alerted before Jim Cramer buys or sells WMT? Learn more now.)

Get an email alert each time I write an article for Real Money. Click the “+Follow” next to my byline to this article.

Amazon Stock Price Today - Is Amazon.com, Inc. (AMZN) a Stock to Watch After Gaining 7.97% This Week?