Wheat Rises To A Six-Year High- The Potential For An Explosive Move Rises (NYSEARCA:WEAT)

When most people think about the most political commodity, they immediately turn to crude oil. After all, over half the world’s reserves of the energy commodity come from the world’s most turbulent region, the Middle East. For decades, the US was an importer of crude oil from the area. Events in the region caused extremely price volatility at times. When Iraq invaded Kuwait in the early 1990s, the price surged, moving from $20 to $40 in the blink of an eye. Oil embargos in the 1970s caused supply issues where the price soared, and people waited in long lines for gasoline. While crude oil’s price can move with politics, wheat has been a far more political commodity throughout history.

The French Revolution began as protests over scarce bread supplies. More recently, the Arab Spring in 2010 started as an uprising in Tunisia and Egypt over high bread prices. Many other examples throughout history caused leaders and government to lose control and power during food shortages. Wheat is the primary ingredient in bread, a staple for nutrition worldwide. Therefore, wheat is the world’s most political raw material. The Teucrium Wheat ETF product (WEAT) tracks the price of three actively traded CBOT wheat futures contracts. Last week, the price of the grain rose to its highest level in over half a decade.

Wheat is the agricultural commodity that feeds the world

Wheat futures on the CBOT reflect the price of soft red winter wheat. While hard red winter wheat trades on the KCBT and spring wheat on the MGE, the CBOT contract is the most liquid and the pricing and hedging benchmark for most wheat worldwide.

The world’s leading producers of the grain in 2019 were China, India, Russia, the United States, Canada, Ukraine, and Pakistan. 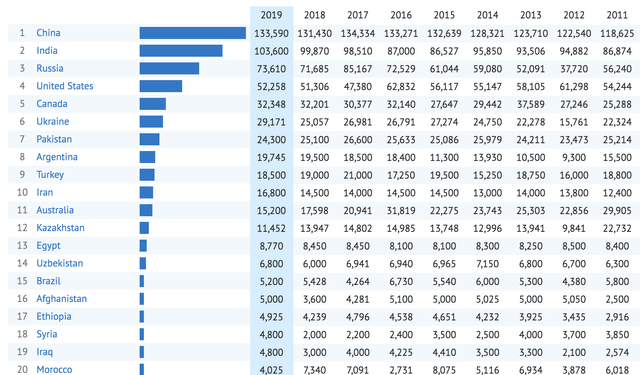 The chart shows the annual output of the top twenty wheat-producing nations worldwide. Meanwhile, over 75 countries produce the grain. The top seven each have over 20 million tons of production.

As the primary ingredient in bread, wheat is the staple that feeds people, so the grain is a matter of national security and continued government control for all countries. Shortages and rising prices can have dire consequences.

The latest WASDE report continued to point to record inventories

The CBOT December wheat futures price has been moving steadily higher since reaching a low of $4.7950 per bushel on June 26.

As the daily chart highlights, the price reached its most recent peak at $6.3075 per bushel on October 16, over 31.5% above the price four months ago. In its latest October World Agricultural Supply and Demand Estimates report, the USDA told the wheat market:

Projected 2020/21 world ending stocks are raised 2.1 million tons to 321.5 million to a new record, with Russia accounting for most of the increase this month.

The USDA released the October report on October 9; despite the projection that inventories for 2020/2021 would reach a new record level, the price of the grain continued to rally. The move above $6 per bushel was a significant event for the wheat futures market.

A technical break to the upside

CBOT wheat futures had not traded above $6 per bushel on the continuous futures contract in half a decade since 2015.

One of the most significant factors facing the wheat market is the absence of consumer hedging over the past years. Since 2012, ample supplies of the grain and falling prices have allowed consumers to adopt a hand-to-mouth approach for requirements. The recent turn of events that pushed the price of wheat above $6 per bushel could cause consumers to begin hedging needs, causing additional buying in the wheat market. Consumers tend to back off from hedging in bear markets. Bull markets often prompt panic buying, as we witnessed in 2008 when CBOT wheat futures reached an all-time high of $13.3450 per bushel, and in 2012 when the price rose to a lower high of $9.4725. The higher the price increases over the coming weeks and months, the more likely consumers will lock-in prices and supplies for the essential grain. We could also see governments worldwide scramble for supplies, prompting, even more, buying if the rally feeds on itself.

Considering that wheat is a highly political staple, the move above $6 is a warning sign for global supplies. Moreover, the last time the price traded above $10 per bushel was in 2008, a dozen years ago. According to the US Census Bureau, the world’s population grows by approximately twenty million each quarter. Since 2008, there are around 960 million more mouths to feed on our planet. A wheat shortage over the coming months or years has the potential to push the price to a new record high, which would be over double the price at the end of last week at $6.2525 per bushel.

Dry conditions in the US and Russia send wheat soaring

The weather conditions in growing areas worldwide are always the most significant factor for agricultural commodity prices. Extremely dry conditions in the world’s leading producing regions, including Russia and the United States, have pushed the price of wheat higher. Simultaneously, rising concerns over availabilities caused by COVID-19 and lockdowns are adding to the buying frenzy in the wheat market.

While the benchmark CBOT contract is moving higher, physical prices from leading producers in the Black Sea region, including Russia, Ukraine, and Kazakhstan, have been steadily rising. The three months from June through August was the hottest summer ever recorded for the Northern Hemisphere. A lack of rain has added to supply concerns.

Russia is now the world’s leading exporter of wheat as it overtook the United States. The Russian Ministry of Agriculture is planning on introducing a new quota on wheat exports starting in January 2021 to safeguard domestic supplies. The quota will tighten the global fundamental equation as demand is ever-increasing because of demographics. The latest WASDE did not point to a current wheat shortage, but the odds of a deficit in 2021 are rising, fueling the bull market in wheat futures.

The forward curve in the CBOT wheat futures market out to 2023 displays a developing backwardation in prices. Backwardation is a condition where futures prices for deferred delivery are progressively lower than for nearby delivery and is a sign of tightening supplies. The higher the price moves, the wider the backwardation is likely to become. 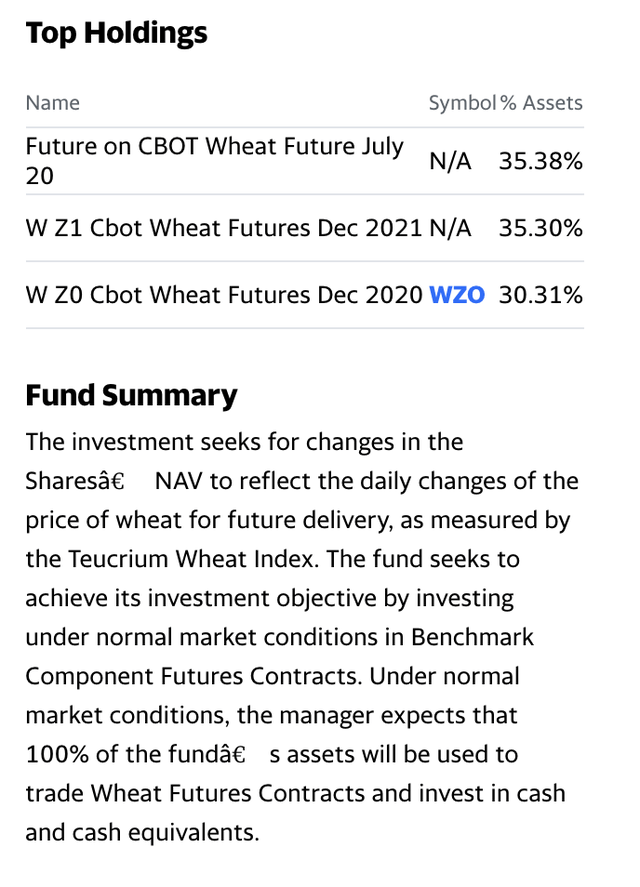 The data on Yahoo Finance needs updating as the July contract has already rolled to September and December. However, WEAT typically holds three actively traded CBOT wheat futures contracts in equal portions. Since most price volatility occurs in the nearby contract, WEAT is likely to underperform the price action in the CBOT active month contract on the upside but outperform during downside corrections. Meanwhile, a developing backwardation in the wheat futures market’s term structure could cause rolls from one month to the next to result in a credit rather than debit for holders of the ETF product, which creates a bonus. 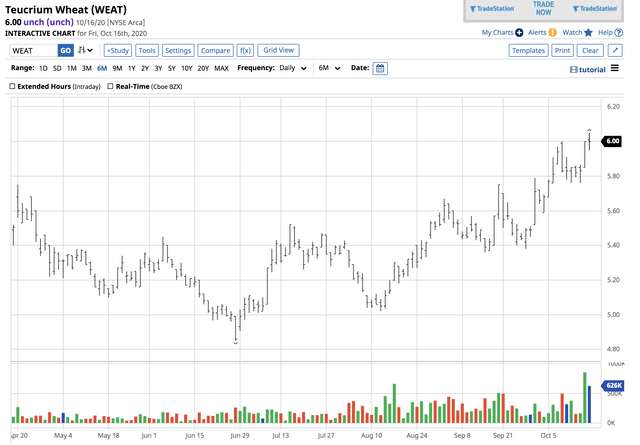 Over the around same period, WEAT rose from $5.36 to $6.05 per share or 12.9%. The blend of three contracts tends to cause the underperformance during rallies.

Meanwhile, for those looking for a wheat-specific ETF product, WEAT is the only game in town when it comes to the CBOT soft red winter wheat.

Those who read my pieces on agriculture know that I believe the fundamental equation’s ever-rising demand will eventually cause significant price appreciation when shortages develop. Wheat could be an exciting market in 2021 and beyond. As the price of the world’s most political commodity rises, we could see the kind of panic buying that occurred in 2008 and 2012. Consumers are woefully underhedged in the current environment, and governments that need to feed their citizens could fuel an explosive rally.

The Hecht Commodity Report is one of the most comprehensive commodities reports available today from the #2 ranked author in both commodities and precious metals. My weekly report covers the market movements of 20 different commodities and provides bullish, bearish and neutral calls; directional trading recommendations, and actionable ideas for traders. I just reworked the report to make it very actionable!

Additional disclosure: The author always has positions in commodities markets in futures, options, ETF/ETN products, and commodity equities. These long and short positions tend to change on an intraday basis.

Free food and supplies to be given out to PPS families

Free food and supplies to be given out to PPS families